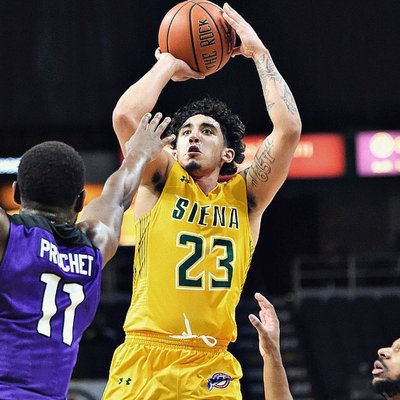 The North Dakota State men’s basketball coaching staff has been very active on the recruiting trail this spring, adding a pair of players in the late signing period out of the Twin Cities. Minneapolis North Senior big man, Odell Wilson IV, along with guard, Jordan Horn, a transfer from Siena that played his high school ball at Tartan, both committed this past week. Horn will have three years of eligibility remaining. In the early signing period, the Bison signed Western Nebraska Junior College transfer, Vinnie Shahid (Hopkins High School), and guard, Jarius Cook (Park Center High School).

All four of these incoming recruits played for strong and highly successful programs in the Minneapolis-St. Paul area and could open the door for more recruits to head north in the future. All of these young men have played on big stages and in big moments. I had a chance to connect with Horn, who left a tough situation at Siena, amid a coaching change. He was a Minnesota Mr. Basketball Finalist in 2016-17 and started 13 games as a true freshman for the Saints, shooting 35% from three-point range. He also hit eight triples in a game against Memphis this past December.

Richman learned of Horn’s interest through an assistant coach at Tartan and the ball started to roll.

“Once I was granted my release to contact other programs, Coach Richman was the only coach I wanted to talk to,” Horn said. “He went to meet with my family back in St. Paul while I was at Siena in school and my grandparents loved him. Once I went on the visit, I knew it was the place to be.”

I listened to a press conference from back on January 5th with former Siena Head Coach, Jimmy Patsos, after an eight-point loss to Niagara.

“His last month’s been great. He’s a great student and a great person. Jordan’s not perfect, none of us are, but he puts the time in… He just puts the time in,” Patsos said. “At 5:00 a.m. he goes in to work out so these things are starting to show.”

This was an important recruiting class for NDSU and the staff was able to land a nice mix of skill sets to the roster. With eight returners and at least five newcomers, this summer will be an important time to determine roles and rotations. The Bison will not have a senior on the roster and it may take time for things to gel with the lack of experience in some areas, but it should be exciting to see how far this team can go once the Summit League tips off.