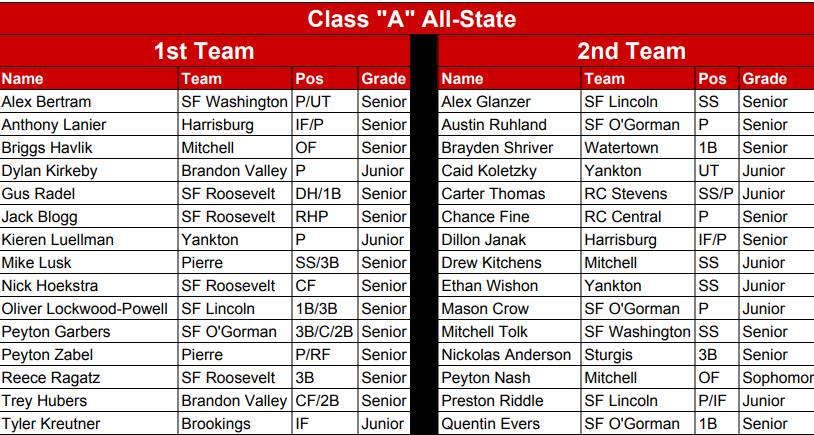 The Hitters were outstanding as well. Reece Ragatz (SFR) led the league with a .478 batting average and a .687 slugging percentage while Oliver Lockwood-Powell (SFL) (.424), Tyler Kruetner (BRK) (.400) and Gus Radel (SFR) (.400) all hit over 400 this year. Nick Hoekstra (SFR) led the league in home runs and Peyton Garbers (SFO) was tops in RBIs.

CLASS A PLAYER OF THE YEAR

Seven juniors made the all-state team. Dakota Valley, Lennox, St. Thomas More and West Central all had multiple selections on the list.

Class B Player of the Year

It was a very tough decision for my player of the year but I believe it came down to Brock Anderson of Lennox and Luke Johnson of Dakota Valley. I gave the nod to Johnson who hit .571 with three homers on the year. That's amazing in this wood bat league. His OPS was 1.487 and he got at least one hit in every game but one.

Congrats to all the award winners in South Dakota Baseball this year.