As the final buzzer sounded in Minneapolis Monday – with Texas Tech suffering an overtime loss to Virginia in the NCAA Championship Game – Matt Mooney knew a very precious chapter in his life was over.

In the moment, the loss was all that mattered. Mooney felt like he, along with Tech’s storybook season, was a failure.

“There’s no moral victory for us,” he told Mark Emmert of the Des Moines Register. “I know a lot of people didn’t think we’d make it here. But we believed all along, all year. We knew we were good enough. We didn’t win.”

That reaction was not a surprise to anyone who knows Mooney. It was very similar to the one he’d had a year earlier, when South Dakota fell to arch-rival South Dakota State in championship game of The Summit League Tournament.

Mooney is the ultimate competitor. He's the kind of guy who will never be okay with losing, regardless of the stakes. And while that is precisely what helped him reach one of the biggest stages in sports, it also tends to cloud his perspective.

The fact is, Matt, you are the furthest thing from a failure. You’re the guy that went from being a zero-star recruit to the cusp of college basketball immortality. You’re the guy that made such a significant impact on a previous program that the people you thought you had “let down” by leaving to pursue a personal dream cheered for you like you were still wearing their team’s jersey.

I know you wanted the trophy. But you’re a winner, with or without it. 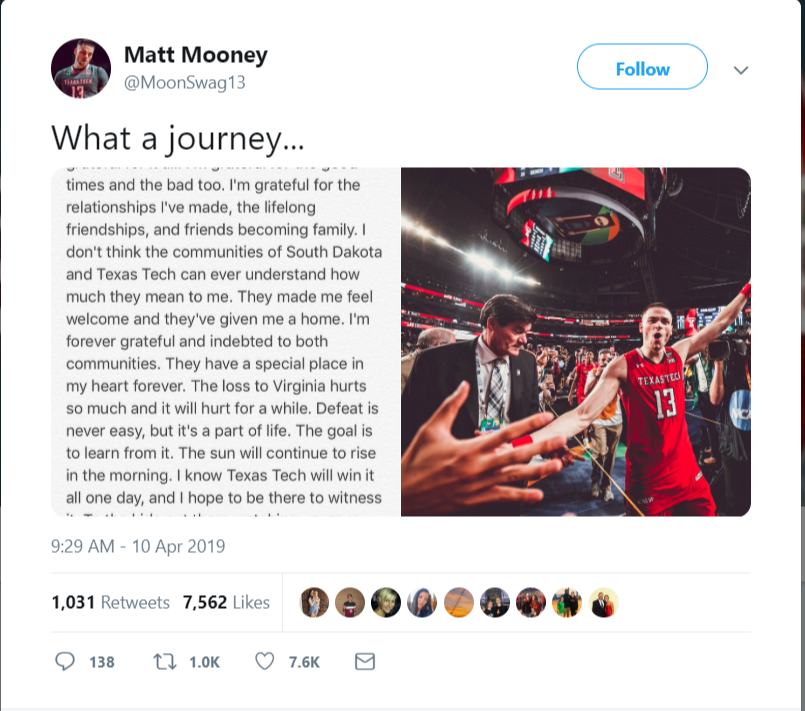 "What a journey it has been. The last few years have been the greatest of my life. I'm grateful for it all. I'm grateful for the good times and the bad, too. I'm grateful for the relationships I've made, the lifelong friendships, and friends becoming family. I don't think the communities of South Dakota and Texas Tech can ever understand how much they mean to me. They made me feel welcome and they've given me a home. I'm forever grateful and indebted to both communities. They have a special place in my heart forever. The loss to Virginia hurts so much and it will hurt for a while. Defeat is never easy, but it's a part of life. The goal is to learn from it. The sun will continue to rise in the morning. I know Texas Tech will win it all one day, and I hope to be there to witness it. To the kids out there watching ... pursue your dreams and never give up. With God, anything is possible. Until next time Lubbock #James1:2-4 #GodHasAPlan #GunsUp"

In the wake of Monday’s heartbreak, Mooney graciously agreed to join me on the MidcoSN Podcast to share his thoughts on a variety of topics. We covered his entire NCAA Tournament experience, the on-going support from South Dakota, his goals moving forward, and much more. Enjoy!