People have always pronounced her name multiple ways. PEG-a-ron, fek-rahn, FREE-kron, even PEG-a-don, and she usually takes it in stride and just answers however you say it. (By the way, it’s PEG-gron with a trill on the ‘r’).

So, when her eighth grade algebra teacher simplified her name and called her P.K., she welcomed the new nickname. Not many people are as easy-going and as easy to root as P.K. She brings it in the personality department and on the court. 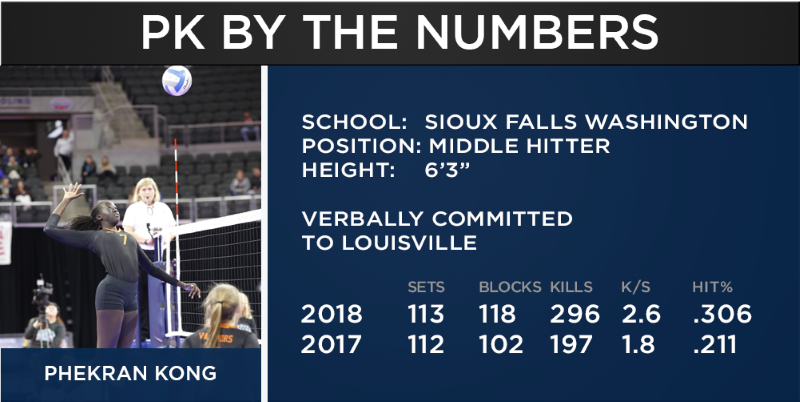 She started playing the sport just five years ago.

"I do love volleyball," she said. "I didn’t grow a true passion to it until late sophomore year, but I started playing when I was in seventh grade."

There’s no doubt her six-foot three-inch body gives her an advantage.

"In middle school, I really started growing," she said. "I mean, it’s kind of hard to find pants, but other than that, I like being tall."

But for this dynamite middle hitter, it’s her agility, power, athleticism and court-smarts that make her one of the top volleyball prospects in the region. In just her first season of playing club volleyball with the Sanford Pentagon Club team, she found herself garnering interest from colleges, even though she hadn’t played a set of high school volleyball yet.

"I was in eighth grade, we were out in Orlando, and then when we got back Mark (Mark McCloskey, the Director of Sanford Power Volleyball) comes up to me and hands me an envelope and I was like, what’s this?" she said. "And he said, ‘read it’. I opened it, and it was a letter from Marquette."

The Milwaukee-based school said they saw her playing at the national tournament and saw a lot of potential. Phekran as a 14-year old wasn’t even dreaming of college volleyball at the time, but it was the first indication that she was pretty good at this game.

Then, after her freshman year at Sioux Falls Washington, a lot more interest from major Division I colleges started pouring in. Phekran said it was kind of overwhelming, but credits her coaches Mark McCloskey, Kelly Schroeder and Kelly Andrews in helping her digest the influx of interest.

In the spring of 2017, PK was halfway through high school and was challenged by Mark McCloskey to decide whether to pursue a volleyball career in college or not. Phekran decided to make the mental switch in her head that she truly wanted to continue her volleyball career on a big D-I stage. "I was like, yeah, I want to do it," she said. From then, the wheels were in motion for Phekran to attack the recruiting process like she rips into a volleyball.

When she originally set out to look for a college, she didn’t want to go too far from home, but after taking visits and seeing some places, she warmed up to moving away.

"College is kind of like my four years to start something for myself," Phekran said. "It will be the beginning of a new life for me, whether that’s far away or close to home. I thought, I’d be okay no matter what the distance was."

Although many colleges showed interest, she quickly pared down to her top four colleges. Those top four were: Colorado State, Iowa State, Tennessee and Louisville.

In the end, Louisville set itself apart with an extra level of care. 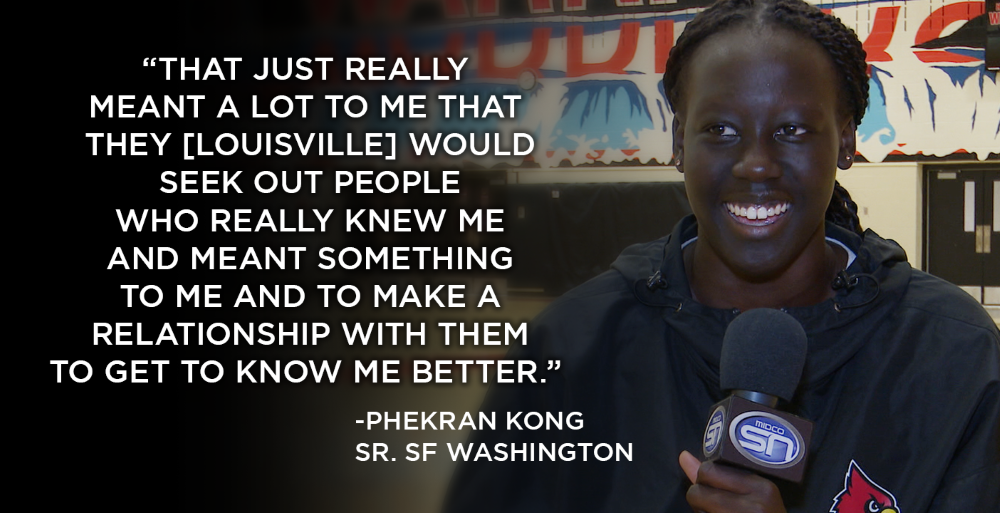 “What really did it for me was one of the Louisville coaches, Dan Meske. He used to coach here at Augie and he knew Sioux Falls," she said.

Dan started an authentic relationship with PK and her most trusted volleyball coaches.

"That just really meant a lot to me that they [Louisville] would seek out people who really knew me and meant something to me and to make a relationship with them to get to know me better," she said.

Phekran also loves that the competition level gets jacked up at the college level.

"I can’t wait to play at a competitive level all the time. That’s something I’m really looking forward to," she said.

P.K. has used this summer to fine-tune her D-I skills on the court.

"Personally, I need to work on transitioning after blocking," she said. "Sometimes I stand too long and take myself out of the equation too easily."

Phekran is determined to continue the ascent of Washington volleyball while she’s been at the school. As a freshman in 2016, they finished 5th at State, then improved to 3rd in 2017 and worked their way up to 2nd last season. This year, they have a lot of new faces to fill some spots but P.K. feels like they could make another run.

“It will be a lot harder this year losing four 6-footers, but I mean the rest of the girls we have now are super hard working and they love to play," PK said. "People probably aren’t expecting much from us, but I still think that we got a great group of girls and we can make a run at it again."

“We are very excited to be hosting the Future 50 and Summer Slam for a second year," he said. "Both events are so positive for volleyball in our state and allow us to feature the top athletes and top teams, not only in South Dakota, but the region in one venue. The talent level of the athletes and teams that attend is unmatched for a high school event in South Dakota, and we hope it’s another positive step for promoting, recognizing and growing the sport of volleyball in our area.”

We will also be broadcasting our first preview show dedicated to high school volleyball this fall. Be looking for show details and air dates to be announced soon.