We had to wait a little longer than we’d hoped for the 95th running of the Howard Wood Dakota Relays, but this April 30 – exactly 727 days since the starting gun was last fired at the Wood – one of the region’s most prestigious track and field meets will make its triumphant return to Sioux Falls. 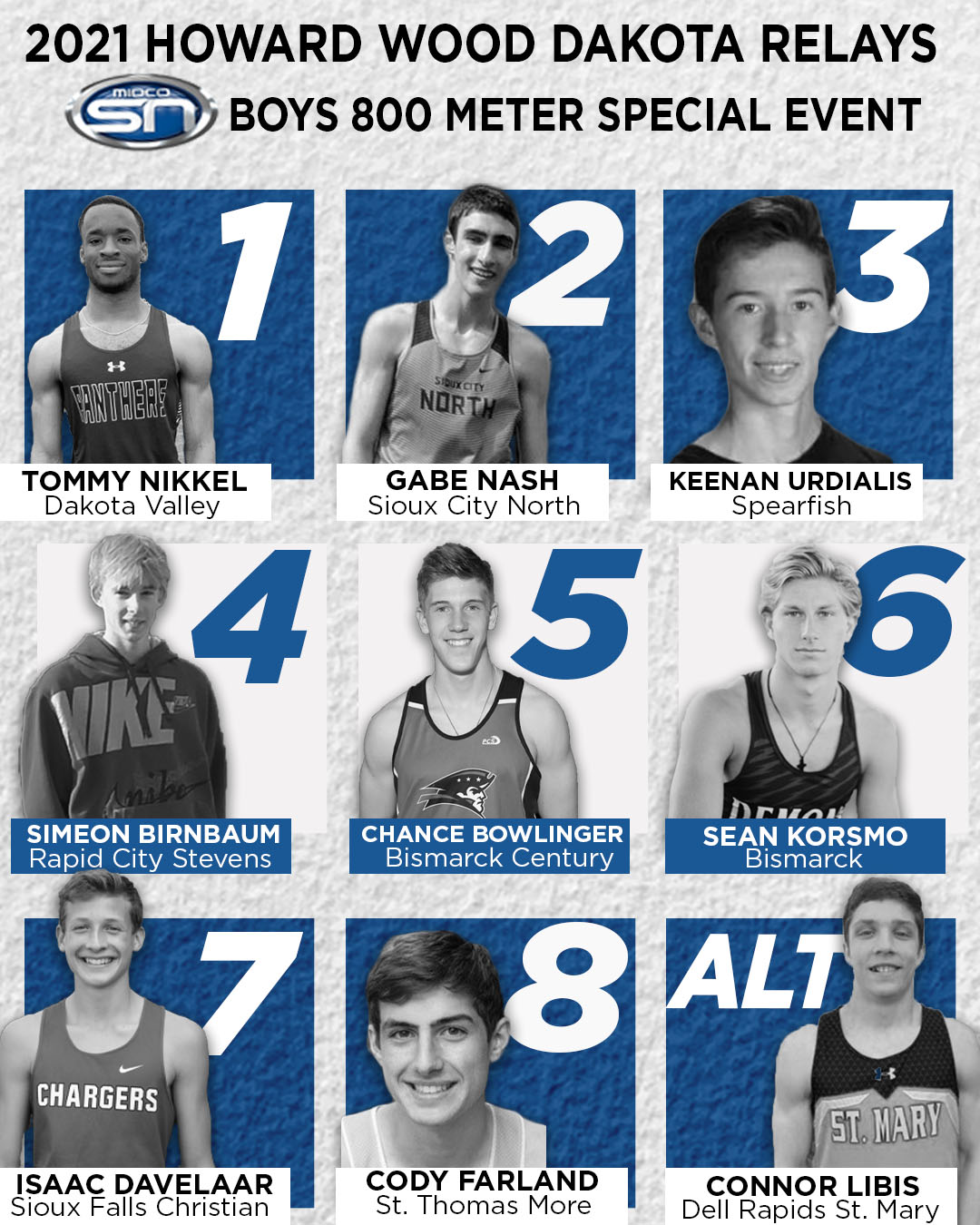 Like most aspects of life in 2020-21, this year’s Dakota Relays will look a little different than we’re used to. College athletes won’t take part this time. The number of competitors in each event will be limited. There won’t be any preliminary heats either, as every race on the track will be a final.

But those alterations won’t dampen the spirit – or the level of competition – that we’ve come to expect at the Wood, which remains an annual destination for the best prep track and field athletes in the Upper Midwest.

Speaking of the best of the best, one evergreen highlight of the meet that won’t be different this year is the invitation-only high school special events.

Scheduled for this Friday night at 7:30pm and 7:45pm, the Midco Sports Network Boys Special 800m and Girls Special 200m will once again feature the top mid-distance runners and sprinters from around the region.

We’ll reveal the Girls Special 200m field tomorrow, but today, it’s the Boys Special 800m in focus, a race that boasts eight of the top half-milers from the tri-state area.

Starting in lane one is TOMMY NIKKEL, a senior from Dakota Valley High School. While at Vermillion High School, Tommy earned a pair of top-four finishes at the South Dakota State Track Meet in the 400m and anchored the Tanagers’ 4x800m relay team to a state title as a sophomore in 2019, cementing his place as one of Class “A”’s top middle-distance runners. Now a senior, he’s currently ranked in the top 15 in South Dakota in the 200m, 400m, and 800m. Tommy was also standout running back for the Panthers’ football team this fall. He’s the son of Timothy and Eve Nikkel, and he’s coached by Vince Tucker.

Starting in lane two is GABE NASH, a sophomore from Sioux City North High School. This fall, Gabe helped lead North to the program’s first ever Iowa State Cross Country team championship, the first time a Sioux City school had won a state title in the sport since 1967. The sophomore captured titles in the 800m and 1600m two weeks ago at the Sioux City Relays and anchored the Stars’ 4x8 team to a 3rd-place finish at last week’s Drake Relays. A 4.07 student, Gabe is the son of David and Shelly Nash, and he’s coached by Abdier Marrero.

Starting in lane three is KEENAN URDIALIS, a junior from Spearfish High School. A two-time all-state cross country runner for the Spartans, Keenan finished 6th in the 1600m as a freshman at the 2019 South Dakota State Track Meet and currently holds the top mile time in Class “AA” this spring. He also ranks second in the state in the 800m. Keenan is the son of Brian and Kristin Urdialis, and he’s coached by Aaron Nida.

Starting in lane four is SIMEON BIRNBAUM, a sophomore from Rapid City Stevens High School. Simeon has been a staple at the South Dakota State Cross Country Meet since he was a 7th grader and already has three all-state finishes on his resume. He’s having a breakout year on the track this spring, posting the top 800m time in South Dakota while ranking top-five in the mile and two-mile as well. Simeon is the son of Paul and Sarah Birnbaum, and he’s coached by Jesse Coy and Paul Hendry.

Starting in lane five is CHANCE BOWLINGER, a junior from Bismarck Century High School. A multi-sport star for the Patriots, Chance was part of Century’s state-titling winning cross country team in 2020 and scored the game-winning goal for the Pats in the state soccer championship this fall. The junior has established himself as the top 800m runner in North Dakota this spring with a PR of 1:56.69 that he posted last week in Minot. He’s also a straight-A student and scored a perfect 36 on his ACT. Chance is the son of Paul and Robin Bowlinger, and he’s coached by Brad Lies and Justin Miller.

Starting in lane six is SEAN KORSMO, a senior from Bismarck High School.The latest in a long line of Bismarck High distance greats, Sean is a two-time North Dakota State Cross Country champion and the defending Class “A” state track champion in both the 1600m and 3200m. The 2020 North Dakota Gatorade Cross Country Athlete of the Year, Sean currently holds the top time in the Peace Garden State in the mile and ranks 2nd in the two-mile. A 4.09 student, he’ll be attending Tulsa University this fall. Sean is the son of Tracy and Mary Korsmo, and he’s coached by Scott Reichenberger.

Starting in lane seven is ISAAC DAVELAAR, a sophomore from Sioux Falls Christian High School. The reigning South Dakota Gatorade Cross Country Athlete of the Year, Isaac set nine Chargers school records in the fall of 2020 and concluded the season at the State “A” Cross County Meet with an individual runner-up finish and a team championship. The sophomore has posted the top 800m time and the second-fastest mile time in the Class “A” ranks this spring. A 3.9 student, Isaac is the son of Matthew and Rachel Davelaar, and he’s coached by Luke Vander Leest.

Starting in lane eight is CODY FARLAND, a senior from St. Thomas More High School. A three-time all-state performer on the cross country course, Cody captured the 2020 Class “A” State Cross Country title, the first Cavalier boy to do so in school history. He was a member of a pair of state track team championships for St. Thomas More in 2018 and 2019 and currently ranks second in Class “A” in the 800m this spring. A national honor society member and four-year honor roll student, Cody plans to attend Dakota State University this fall. Cody is the son of Mike and Teri Farland, and he’s coached by Royce Wuertzer.

This year’s alternate is Dell Rapids St. Mary High School senior CONNOR LIBIS. One of South Dakota’s most decorated multi-sport athletes in recent memory, Connor has earned 20 varsity letters for the Cardinals in his prep career and has been recognized as an all-state performer three times in basketball and twice in football. He’s also earned podium spots one two occasions at the Class “B” state track meet. The Rushmore State’s third-all-time leading scoring on the hardwood, Connor plans on playing basketball in the fall at Briar Cliff University. Connor is the son of Craig and Steph Libis, and he’s coached by Blaine Bacon.

As everyone in this year’s field boasts an 800m personal best between 1:56 and 2:00, this promises to be one of the most competitive – and wide open – Special 800m races we’ve seen in recent memory.

The event will begin Friday, April 30, at 7:30pm CT from Howard Wood Field, and if you can’t make it in-person, you can watch this race and much more live on MidcoSN and Midco Sports Plus! Our two-day coverage of the Dakota Relays begins Friday at 6pm and continues Saturday at 1pm.