We’re just days away now from the 95th running of the Howard Wood Dakota Relays in Sioux Falls, and the anticipation is starting to build for the meet’s return after a Covid-19 enforced hiatus a season ago.

This meet brings together some of the top prep athletes in the Upper Midwest every year, and this weekend will be no exception, especially when it comes to the invitation-only high school special events. 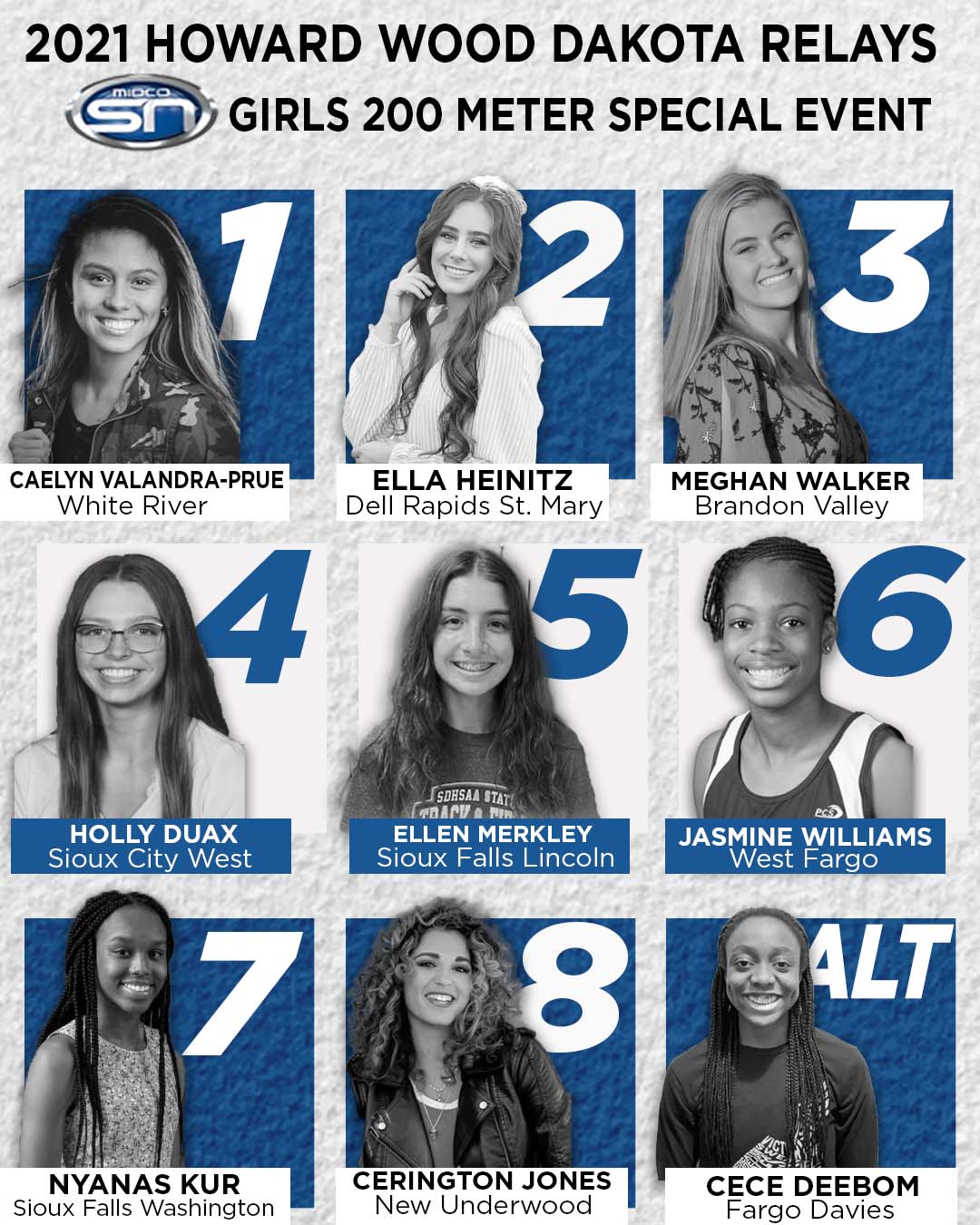 Scheduled for this Friday night at 7:30pm and 7:45pm, the Midco Sports Network Boys Special 800m and Girls Special 200m will once again feature the top mid-distance runners and sprinters from around the region.

Yesterday, we revealed the field for the Boys Special 800m. Today, it’s all about the Girls Special 200m, and between you and me, it’s one of the better top-to-bottom fields the Dakota Relays has put on display in recent years.

Running in lane one is senior CAELYN VALANDRA-PRUE from White River High School. The Class “B” Track MVP of the 2019 South Dakota State Meet, Caelyn has been a multi-sport standout at the varsity level since middle school, capturing five individual state track titles in everything from the 100 to the 800 to go along with three Dakota Relays championships in the 400, with her first coming in 2016 as a 7th grader. Her basketball resume may be even more impressive, as Caelyn ranks 8th on the state’s all-time scoring list, is a five-time all-state performer, and helped lead the Tigers to the program’s first state title this March. She’s committed to run at the University of South Dakota in the fall. Caelyn is the daughter of Mike Prue and Stacy Valandra, and her coach is Corey Sayler.

Running in lane two is senior ELLA HEINITZ from Dell Rapids St. Mary High School. The top-ranked sprinter in the 100 and 200 in South Dakota’s Class “B” this year, Ella has earned seven individual state track medals in her decorated career, including top-eight finishes in the 100, 200, and 400 as a sophomore in 2019. A multi-sport star for the Cardinals, Ella has been an all-conference performer in basketball and volleyball in her prep career. She’s committed to run at Augustana University in the fall. Ella’s parents are Adam and Sandra Heinitz, and her coach is Blaine Bacon.

Running in lane three is junior MEGHAN WALKER from Brandon Valley High School. A versatile sprinter who’s been outstanding in her first year in Class “AA”, Meghan currently ranks top three among South Dakota runners in the 100, 200, and 400, three events that she placed third in at the 2019 State Track Meet. A former standout in Class “A” at Sioux Falls Christian, Meghan is already an eight-time state medalist and holds the Chargers’ school record in the 100 and 200. Meghan’s parents are Randy and Christine Walker, and her coach is Troy Sturgeon.

Running in lane four is junior HOLLY DUAX from Sioux City West High School. One of the rising stars in Iowa track and field, Holly is the top-ranked 100-meter runner in the Hawkeye State and is coming off a title in that event at last week’s Drake Relays. She also currently ranks third in the state in the long jump. As a freshman at the 2019 Iowa State Track Meet, Holly finished third in Class 4A in the 100 and 200. She’s also an academic all-conference pick in three sports and ranks in the top 1% of her class. Holly is the daughter of Tim and Mary Duax, and her coaches are Eric Strim and Lauren Blinde.

Running in lane five is freshman ELLEN MERKLEY from Sioux Falls Lincoln High School. The breakout star of this South Dakota track season, Ellen has set Lincoln school records in the 100, 200, and 4x1 this spring and is top-ranked in the Rushmore State in both sprints and the long jump. She was Lincoln’s track MVP as a 7th grader while helping lead the Pats to their third “AA” team title in the last four seasons. A 4.0 student, Ellen is the daughter of Josh and Joni Merkley, and she’s coached by Jim Jarovski and Eric Doyle.

Running in lane six is junior JASMINE WILLIAMS from West Fargo High School. One the best sprinters in North Dakota, Jasmine is the defending Class “A” 200-meter champion in the Peace Garden State. In that state meet in 2019, she was also the runner-up in the 100 to cap off an outstanding freshman season. This year, Jasmine has been voted a team captain for the Packers. Jasmine is the daughter of Patience and Sei Wonokay, and her coaches are Tarah Dahl and Darin McKinnon.

Running in lane seven is senior NYANAS KUR from Sioux Falls Washington High School,. Another talented, versatile runner, Nyanas currently ranks top-three in South Dakota in the 100 and 200 and boasts the state’s top time this spring in the 300-meter hurdles. A two-time team MVP for the Warriors, Nyanas has finished top-five at the South Dakota state meet in three individual events and anchored Washington’s state-record setting 4x1 team to a “AA” title in 2018. She’s committed to run at Augustana University in the fall. Nyanas is the daughter of Shuol Kur and Elizabeth Malual, and her coach is Shane Reilly.

Running in lane eight senior CERINGTON JONES from New Underwood High School. Our third decorated senior sprinter from the Class “B” ranks, Cerington is the defending state champion in the 400, one of five state track titles that she’s earned in her career. She currently owns the top 400 time in all of South Dakota and is ranked first in Class “B” in the 100 and 200 as well. She’s committed to run at South Dakota State University in the fall. Cerington’s parents are Jeff and Candy Jones, and her coach is Stacy Finkbeiner.

Tonight’s alternate is Fargo Davies sophomore CECE DEEBOM. CeCe has been dominant on the track and in the field this spring, ranking first in North Dakota in the 100, the 100-meter hurdles, and the long jump, while posting the state’s second-fastest time in the 200. As an 8th grader at the 2019 state track meet, she finished 4th in Class “A” in the 100 and the 100-meter hurdles and ran on the Eagles’ title-winning 4x1 team. A 4.0 student, CeCe is the daughter of Tornubari and Barivure Beage, and her coach is Rory Beil.

Much like the Boys Special 800m, this race feels wide open, as nearly the entire field have personal bests within a few tenths of a second of each other.

The event will begin Friday, April 30, at 7:45pm CT from Howard Wood Field, and if you can’t make it in person, you can watch this race and much more live on MidcoSN and Midco Sports Plus! Our two-day coverage of the Dakota Relays begins Friday at 6pm and continues Saturday at 1pm.

Enjoy the lead-up to the best two days of prep track and field all year in the Dakotas, and I’ll see you at the Wood this weekend!