Ask anyone associated with high school track and field in the Dakotas about the 2021 season, and they’ll all say the same thing…

This year was special.

The lack of a spring season in 2020 is partly the reason for that, confirming the old adage/80’s hair band chorus, “You don’t know what you got…’till it’s gone.”

But along with the emotional lift this season brought simply by its existence, 2021 was made all the more memorable thanks to the elite quality of the performances across North and South Dakota.

For context, that’s twice as many as the Dakotas have had in the previous three seasons combined.

(Those two athletes, by the way? Grand Forks Red River’s Shelby Frank and West Fargo’s Akealy Moton. Frank had a discus effort of 167-0 as a junior in 2019 that put her No. 4 in the nation, while Moton’s North Dakota high school state record shot put of 49-9 in 2017 was also fourth-best in the country. Frank is now a freshman on Minnesota’s throws team, while Moton is a junior at NDSU and an NCAA national title contender in both the shot put and javelin.)

Along with national acclaim, 2021 saw the record books re-written on both sides of the border, with three new state records set and an incredible 11! Platinum records go down, the most that have been broken since 2016, the second year of this friendly interstate competition.

If you’re unfamiliar, the Platinum Awards were established to recognize the top individual performance in each event contested in North and South Dakota during the season. It doesn’t matter if that performance occurred in a tune-up meet in March or on the final weekend of the season; as long as it happened during a sanctioned meet, it counts.

Like most years, the 2021 Platinums were hotly contested. Changes occurred across the leaderboard weekly until the final events of the season, with an incredible 16 Platinum marks set during the state meets alone.

In the end, the total number of Platinum crowns would be split evenly between the Dakotas for the first time in the six-year history of the competition, with North Dakota dominating the boys’ list – including an unprecedented sweep of the running events by athletes exclusively from Bismarck – and South Dakota coming out of top in the girls’ events.

Two athletes defended their Platinum titles from 2019, with Bismarck Legacy’s Calob Larson (100m and 400m) and Jamestown’s Meghan Ford (3200m) retaining the top times in the Dakotas in their specialties from their sophomore seasons.

Larson also added the 200m Platinum crown to his resume in 2021, and – along with distance treble champion Sean Korsmo of Bismarck High – achieved rare triple-Platinum status, joining Edgeley/Kulm’s Isaac Huber in 2019 and Belle Fourche’s Shayla Howell in 2018 as the only athletes to pull that feat off in a single season.

The three additional Platinums for Larson give him six for his career, breaking the previous record of five set by Rapid City Stevens’ great Elizabeth Schaefer, who’s now an All-American pentathlete at Augustana. (BTW: Larson has committed to run at North Dakota State next season.)

2021 also brought two double-Platinum winners: Sioux Falls Lincoln’s Ellen Merkley (100m + 200m) and Rapid City Central’s Matayah Yellow Mule (long jump + triple jump), both of whom will be back next season to defend their crowns as a sophomore and senior, respectively.

Okay, enough context. Here’s the full list of our 2021 Platinum Champions! Congrats to our winners! 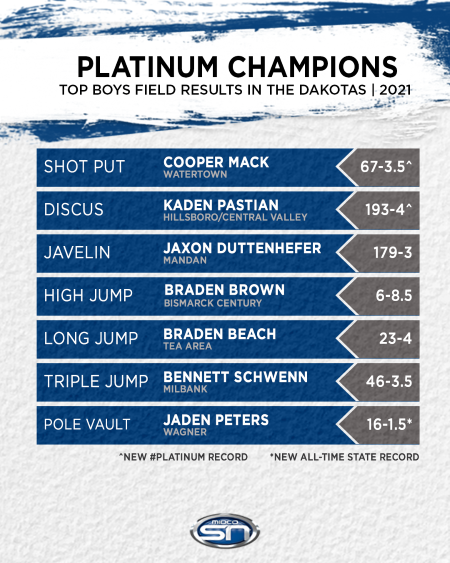 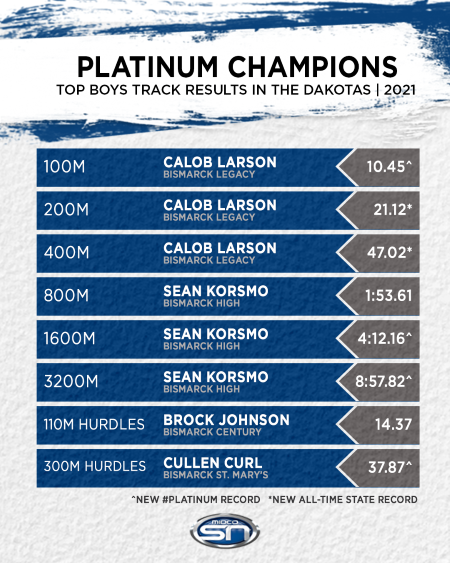 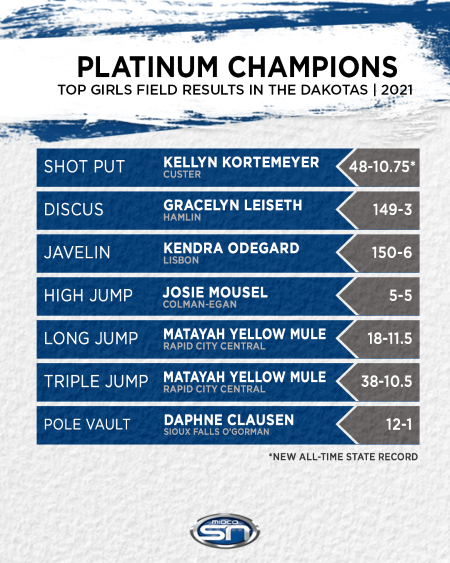 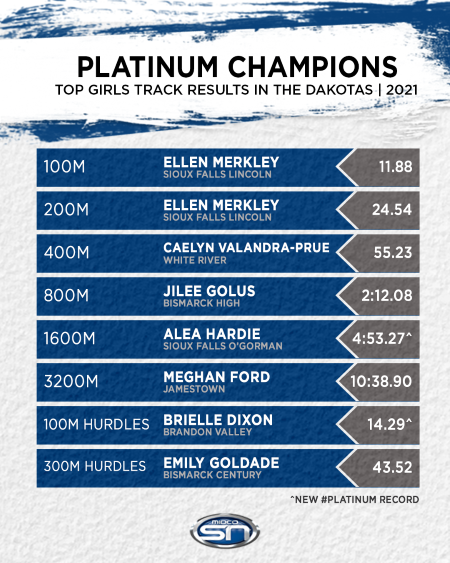 Congratulations again to all our winners this season! If I’ve missed any Platinum-worthy marks, please email me at alex.heinert@midco.com or contact me on Twitter at @AHeinertMidcoSN.


Filed Under Running/Track and Field