The Many Talents of Tolu

He is a homeowner and a business owner and he has been a recruiter and a big brother to his younger teammates.

Ogunrinde was a running back and a wide receiver at Park High School in the Twin Cities and he played a little bit of everything except defensive end.

“I played linebacker, so it was a good transition. And I was on the line sometimes as a hybrid, edge-rusher kind of guy but never D-end so it was new to me completely.”

He made the flip to the defensive side in 2017 and started to learn the role of a pass rusher.

Ogunrinde himself is a big believer in others. Take Jackrabbit safety Michael Griffin, for example.

Griffin and Ogunrinde were teammates in grade school and high school but went separate ways.

Griffin started his college football career in Division Two at Southwest Minnesota State but wanted to play Division One and Ogunrinde was more than happy to help bring his friend to Brookings.

“My whole life, yeah,” says Griffin, “known him for a long time. He spent a lot of time trying to recruit me to come here.”

“Me and Mike have been, I wouldn’t say best friends, for 14 or 15 years,” says Ogundine, “because when we met each other we hated each other, and we were always clashing and arguing. We would argue about anything and that’s just where our friendship came from was through arguments about nothing. Growing up with Griff was always a battle between ‘I scored the longest touchdown here or I had the better catch here or a better run here’ and that’s what our relationship was. And he won’t tell you this, but I was faster than him throughout high school. I know I came here and got a little bigger and he might have me now. MIGHT have me now. But Mike’s been my best friend and the relationship is deeper than anything and that’s my brother for life.”

Ogunrinde has a knack for building relationships. He also may have a talent for building a business, as well.

He is the owner and founder of an on-line clothing company called Finesse and Grind. 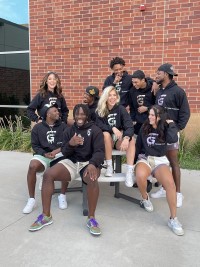 “It’s a luxury street clothing brand,” says Tolu. “I make all the hoodies. I have these shorts and they are corduroy patch shorts. So, I sell myself as an Essentials or like a Louis or a Gucci, but I am starting off small and trying to get people to get up with it and support it.” 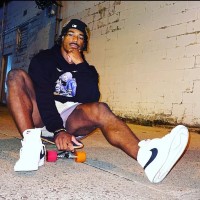 “The clothing is what I want to do. Just putting my ideas and abstracts on clothing. I’m a big anime guy and I know guys don’t like anime but that’s where the custom side comes from. I know (SDSU teammate Thomas) Stacker likes Spiderman, so he is hitting me up for a cool Spiderman edit so I’m going to make that for him. But the guys really like the apparel and have been really supportive and helping me build my confidence on this brand.”

And, as is his nature, Ogunrinde would like to return the favor and use his business to help his teammates by taking advantage of the new NCAA rules on Name, Image and Likeness.

“With the NIL stuff I am hoping to launch a campaign Give Back to the Players and we are working on a thing where we can get guys like Pierre Strong and Isaiah Davis and Logan Backhaus designs where they have their shirt and their last name on the back and every shirt that sells a portion of the profits will go to them. And that is what Finesse and Grind is. We want to make sure the guys that are working hard for this program and working hard in their respective sports get their money back in.”

And Ogunrinde has already spread some of his good fortune around. He awarded a $500 “scholarship” to sophomore defensive end Kevin Brenner. 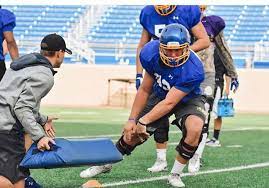 Ogunrinde says Brenner earned it thru hard work. Brenner says his ability to handle a hard time probably had something to do with it.

“When I first met him,” says Orunrinde, “he came into my house, and he had these really ugly boots… so ugly.”

“It was snowing,” explains Brenner, a sophomore from Wisconsin. “I drove through a snowstorm to get here for my visit. And they were just brown, Carhart boots. He was probably just upset they weren’t his brand or something.”

“I told myself I need to make fun of him as long as he is here,” laughs Orunrinde. “But, no… every time I made fun of him, he just laughed and took it on the chin. And if you saw Kevin’s work ethic and what he has put in since he’s been here, he has elevated his game.”

“He has really grown into a big brother for me,” says Brenner, “and the amount of respect I have for him for what he is doing and all the work he puts in. Tolu has become that guy for me and he is a jokester and I think he is funny still. Sometimes.”

“It wasn’t like charity,” Ogunrinde stresses. “I wanted him to know that he deserved it as my brother and as a friend that I have grown to cherish around here. He really deserved that money, and I don’t want anyone to think I was doing it for the show. I didn’t care for anyone to know but it is something he really deserved.”

“The coolest thing in sports off the field I think I have been through,” Brenner recalls. “I called my mom right after and she said, ‘What do you mean somebody gave you $500?’ and I said my teammate gave me a scholarship. I never thought a scholarship would come from anybody other than the coaches and the athletic department, but to come from a teammate and a big brother and a guy I look up to is just so special to me.”