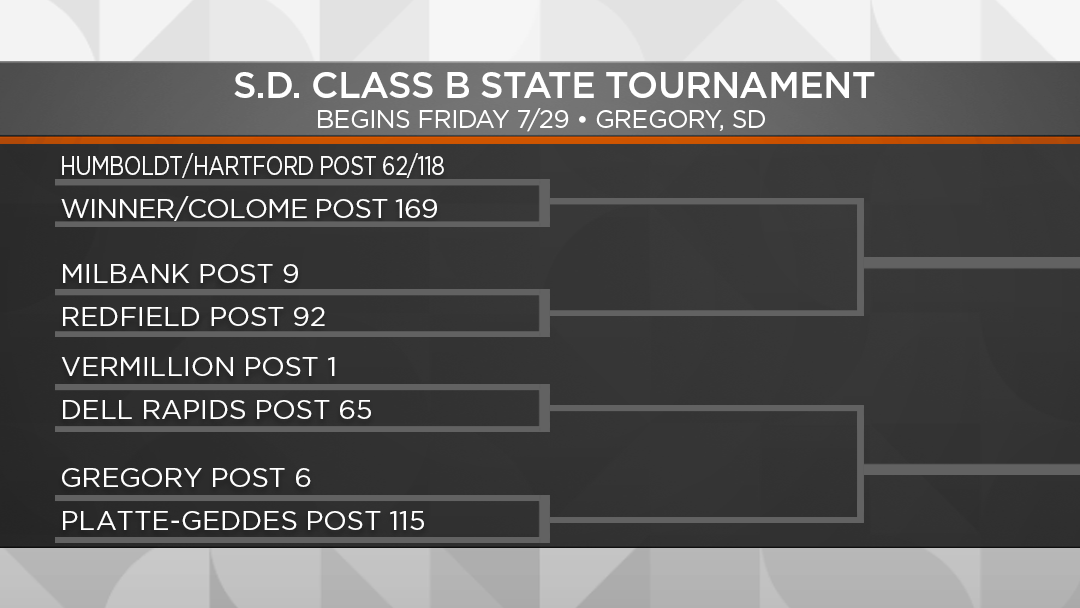 The 2022 tournament begins this Friday in Gregory S.D. The action starts at 10:00 AM when Humboldt/Hartford takes on Winner/Colome.

These guys have played a tough schedule that handed them five losses in a row from the end of June through last week, but they caught fire at the right time to qualify for the state tournament. They have gotten a big season from Bennett Sebert, Loren Jacobson, Gavin Koch and Gage Nelson at the plate. They are hitting just .274 as a team but the top part of this order is dangerous and can get hot. Derek Ranken has led the pitching staff with 27 innings with a 0.52 ERA and a sub 1 WHIP.

The Royals earned a spot at state with a convincing win over Gregory in 7B. They have good experience on the roster with Joey Cole and Charley Pravacek and some really good young talent like Aiden Barfuss in the middle of the lineup. Head Coach Shane Phillips has great balance on this team and knows they have the potential to rake.

Milbank cruised through the regions beating Castlewood 13-3, then Claremont 10-0 and finally Big Stone 12-2. Their pitching and defense has been one of their keys to success. Isaac Schulte, Kellen Hoeke and Kaden Krause dominated in the region tournament. The lineup features Kaden Krause, Justus Osborn, Kellen Hoeke and Merik Junker.

Redfield has had some really good performances this year. They'll try to ride that into the state tournament to prove they can play with anyone in the state. The core of their team has a lot of baseball experience. Fehi Faonelua, Camden Osborn, Owen Osborn and Peyton Osborn continue to lead the way.

Post 1 has a great mix of talent and it starts at the top of their lineup with Willis Robertson who sets the table as well as anyone in the tournament. Connor Saunders, Jack Kratz and Charlie Ward are explosive in the middle of the lineup. Jake Jensen is one of the best pitchers in thei tournament field for Vermillion.

Dell Rapids survived another challenging schedule. They hit .329 as a team this season with Landon Ruesink leading the way (.438 12 XBH, 35 RBI). Their pitching staff may be the key to their success in this tournament. They have a lot of arms to go do including Jack Henry, Will Jaton, Treyse Eastman and Joe Rechtenbaugh among several others who can come in to shut the door. Dell Rapids won their only meeting against Vermillion on July 6 with a 1-0 win where Jack Henry pitched a no-hitter.

Gregory lost to Winner/Colome in region 7B play but still have a fine team to host this tournament. They hit .330 on the season with a dynamite top four in the lineup including Trey Murray, Gannon Thomas, Bryce Frank and Rylan Peck. On the mound Ben Witt and Bryce Frank have logged the most innings.

These guys have the best winning percentage in the field. They got a thrilling walk off home run from Grayson Hanson to beat Tabor in the 4B finals. They hit .307 as a team this year with a very deep lineup including Aiden Bultje, Dakota Munger, Jackson Neuman, Jaxon Christensen, Joey Foxley, Caden Foxley and Grayson Hanson. Their pitching depth starts with Dawson Hoffman and Caden Oberbroekling who lead the team in strikeouts. Platte-Geddes beat Gregory 13-3 in their only meetings this season.