There’s been some new life breathed into several 11A programs after seeing playoff success that’s eluded most of the programs for quite some time. For instance, Dickinson and Fargo North both played in a state semifinal game for the first time in over two decades. Meanwhile, Jamestown not only appeared in its first state championship game since 1994 but won its first title since the 1930s. It’s all a byproduct of how the landscape of high school football changed with the realignment prior to last season. This year will see change again as St. Mary’s moves up to the 11AA division based on their recent success.

I see this division being a little bit unpredictable going into the year. I pegged Jamestown as the front runner based off them returning some key pieces from their championship squad, but I feel that North and South could really push for that top spot by the end of the year. 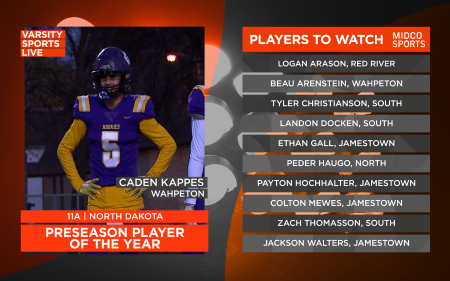 The last time we saw the Blue Jays on the field they were busy putting up 41 points on a St. Mary’s program that hadn’t allowed more than 40 points in a game since 2009. Jamestown had that offense humming in the postseason. They also scored 35 points in the quarterfinal win over Red River and 41 points in the semifinal victory over North. Head coach Bill Nelson knows the reality is that they graduated fifteen important seniors off last year’s championship squad, but that just means opportunity for others. Nelson says, “Just like every year there are holes to fill, but it's never about one person. Every one of these young men has put in a lot of time and work to make themselves and the team better.”

Starting quarterback Payton Hochhalter returns after passing for 1,700 yards and 17 TD last season despite only playing six games due to suffering a broken collarbone midway thru the year. Hochhalter will be in search of new weapons though. Not only did they graduate their leading rusher, but also their top five receivers. Look for senior Aden Braun to get more carries in the backfield. I expect Preston Gall to become one of the top targets in the pass game along with tight ends Jackson Walters and Colton Mewes. Walters and Mewes, who were both named all-state last year, will also be counted on to be playmakers from their linebacker spots. Mewes led the team with 83 tackles last year and 21 TFL, while Walters finished second on the team with 63 tackles. Senior Ethan Gall is back to anchor the offensive and defensive lines after racking up 40 tackles last year in an all-state season as a junior.

There’s a different vibe around Spartan practice these days after they won seven games in a season for the first time since 2002. North has to replace a long list of all-staters from a year ago including QB Danny Boutain, RB Mason Lockwood, WR/DB Nathaniel Fritel and linemen Alex Wegner and Jacob Johnson. However, head coach Adam Roland seems confident in the players coming up. “We will appear young but return a lot of sophomores that started for us.”

The top two question marks for North will be the quarterback spot and the offensive line where they only return one starter (senior Adam Jarski). Ethan Welk, who played significant time in the secondary last season, will be the team’s starting quarterback. He was the signal-caller during his freshman season and guided that team to an undefeated season. Now in his junior season, he’ll get the chance to lead the offense again with some pretty good talent around him.

Senior Peder Haugo returns at running back and linebacker. He looks the part of being a guy that’s going to be tough to deal with on Friday nights this fall. Haugo was off to a great start in 2021, rushing for 535 yards on just 61 attempts (8.8 ypc) before suffering a broken wrist that caused him to miss four games. The receivers are an unproven group, but full of potential. Jeremiah Sem and Carter Zeller are household names on the basketball court, but they’ll both be weapons in the pass game for the Spartans this season. The defense returns seven starters from a group that shined at times last year but battled inconsistency. Special teams is a bright spot for North, as well. Junior Max Watson didn’t miss an extra point last year and kicked a pair of 40+ yard field goals.

The Bruins were young last season and took their lumps, but head coach Tyler Kosel is confident that the tough learning lessons in 2021 will lead to success on the scoreboard in 2022. “We return a lot of players that played a lot of downs last season,” Kosel said. “We had a great summer of getting better.”  South finished last season with a 4-6 record, but three of those losses were to teams that’ll play at the 11AA level this year. They have those matchups against 11AA competition on the schedule again this year with games against Shanley, Davies and St. Mary’s, but I think they’ll be much more prepared this time around.

As for personnel, the Bruins return seven starters on each side of the ball. Senior LB Zack Thomasson is coming off a big year. Thomasson was named first team all-state thanks to these impressive stat totals: 94 tackles, 2 sacks, 11 TFL, 4 forced fumbles and a pair of fumble recoveries. The 6’2” 185 lb senior will be a force again on that side of the ball along with juniors RB/LB Dorian Sandness (36 tkls, 5 TFL last year), RB/DL Cole Kegbeh (37.5 tkls, 13.5 TFL, 5 sacks, 2 INT last year) and senior OL/DL Tyler Christianson (37 tkls, 10.5 TFL). Last year, the Bruin defense posted two shutouts and held teams to under 14 points in five games.

If South wants to make the leap to being a state title contender, it’ll need more from its offense. Like any sophomore that starts at quarterback, Kolby Nissen had his lumps last season. Now entering his junior year, he should be better for it. Nissen passed for 793 yards, 6 TD, 14 INT and rushed for 289 yards and 3 scores in 2021. He’ll try to build on his chemistry with junior receiver George Hansegard (10 rec, 211 yds, 3 TD last year) and junior tight end Reis Kessel (21 rec, 173 yds last year). Look for Sandness (536 rush yds, 4 TD last year) and Damarion Semanko to lead the ground attack behind an offensive line that features first team all-state pick Tyler Christianson. Special teams is a strength for the Bruins, too. Landon Docken is arguably the top kicker in the state. Docken made seven of nine field goal attempts last season with a long of 41 yards. He also connected on 16/18 PATs and recorded 14 touchbacks. He’s been putting in a lot of work in the offseason and recently tweeted out a video of himself nailing a 60-yard FG.

The 5-6 record for the Midgets last year may not have had the “wow” factor, but if you followed Dickinson’s season close enough you saw how hard they competed. Outside of Jamestown, they were the only 11A team to defeat Fargo North. They also nearly snapped Bismarck Century’s 25-game win streak before ultimately falling 15-12. A class of twelve seniors headlined by Mr. Do-It-All Troy Berg graduated out of the program, but head coach John Tuchscherer likes what he has returning. “We return a good number of seniors and juniors who played a lot last year and gained valuable experience”, Tuchscherer said.

The strength of this year’s DHS team resides in the trenches where they return all five linemen that started last year. The battle for the starting quarterback spot will come down to junior Stephen Zawodny and sophomore Shayden Jackson-Zeitz. Zawodny was the backup last season and played well in the two games he was thrust into action. Senior RB/LB Sam Stillings will be a leader on both sides of the ball. He’ll likely get the majority of the carries behind that veteran front five. Look for senior WR/DB Bennett Carlson to contribute not only in the passing game, but in the secondary after an all-state junior year.

The Roughriders played good in spots last year highlighted by their first victory over South since 2012. But Vyrn Muir’s team was overmatched against the top teams in the division like Fargo North (42-8 loss) and Jamestown (35-0 loss in state quarterfinal). A new year brings renewed optimism though. “We have a veteran group of seniors who have played a lot of football the past two seasons and were able to experience the playoffs against a very good Jamestown team”, said Coach Muir.

According to Muir, the biggest strength heading into the 2022 season is the return of five of the six starters on the offensive line including the tight end Logan Arason. Arason was an all-EDC performer last year leading the team with 22 catches for 166 yards. The 6’4” 250 lb defensive end was also terrific on defense where he racked up 32 tackles, 6 TFL and forced to fumbles. He already holds offers from UND and several NSIC programs. He’s an elite javelin thrower, as well. Senior RB/LB Brett Feller is super athletic and enters his third year as a starter on defense (40 tkls, 8.5 TFL, 2 sacks last year). The top college prospect on the line is 6’2” 270 lb junior Lawson Lotysz who returns as a 2-way starter on the offensive and defensive lines. Lotysz’s father was an all-american at UND and his older brother Peyton is battling for a starting spot on the offensive line this season with the Fighting Hawks.

The quarterback spot is still up for grabs, but the two front runners are sophomore Pearce Parks and senior Cole LeDuc. LeDuc has seen quite a few snaps the last two years on defense in the secondary and racked up 22 tackles and an interception last year. Parks is the younger brother of current UND freshman Paine Parks. He has some fabulous athleticism but would need some seasoning at the varsity level.

The Huskies were an offensive juggernaut last year thanks to their electrifying passing game. Blake Schafer passed for 2,752 yards, 32 TD and 8 interceptions last year and earned Midco Sports Class 11A player of the year honors as a result. Finding Schafer’s successor won’t be easy, but senior Beau Arenstein appears to be next in line. Arenstein will make the transition after catching 69 passes for 764 yards and 2 TD last season from his slot receiver position. He’s 6’0” 170 lb and has shown great toughness and speed during his varsity career as an all-state receiver and defensive back. He’ll have the best target you can hope for to throw to in 2-time all-state receiver Caden Kappes who I pegged as my preseason player of the year in the division. Kappes made 53 receptions for 879 yards and 19 TD last year to go with his 75 tackles, 8 TFL and 1 interception last season. If I’m the Huskies, I’m doing everything in my power to find ways to get the ball in his hands. Defensively, the Huskies need to improve. They gave up a lot of points last year and they’ll need to show a lot of progress if they have hopes of making a serious run in the postseason.

The Firebirds had an odd season last year. They opened with a disappointing loss to 11B program Grafton, but then rattled off four straight victories before ending the season on a five-game losing streak. Junior WR/DB Drew Hofstad is the top returning talent for the Firebirds after an all-state selection as a sophomore. Hofstad hauled in 31 catches for 651 yards and 9 TD last season. He also made 32 tackles and a trio of interceptions on defense. Look for senior RB/LB Reese Brown to anchor the defense after leading the team with 41 tackles and 10.5 TFL last fall. Brown and fellow senior Colton Schneider should see the majority of the work in the run game.

Class 11A Preseason Player of the Year