The top division in North Dakota high school football has some question marks across the board. Can Sheyenne overcome the loss of a significant senior class to repeat? Will Mandan’s talent push them to the top of the WDA or will Century continue to rule? I’ll try my best to give you some of the answers below, but until we start seeing things happen on the field those questions will be tough to answer.

Also, there’s a new addition to the division this year with St. Mary’s making the jump from 11A to 11AA based off their success points over the last four seasons. So, that’ll make it seven teams from the west and four from the east. But, technically the east and west distinctions won’t matter much this season as the NDHSAA moves to a statewide playoff seeding system in both Class 11AA and 11A. Remember the big issue last year was that the fourth place team from the east, Davies, beat four of the five teams from the west that qualified for the playoffs but didn’t get in themselves because only the top three in the EDC advanced. So, this year the top eight teams regardless of east or west will be seeded in the state tournament. As a result, teams are playing more crossover games than ever before to make sure they have a good strength of schedule come playoff-seeding time. It all should make for an exciting season because every game matters! 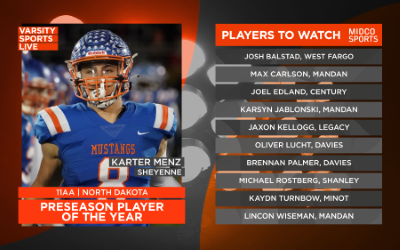 The Mustangs take the top spot for me coming off the program’s first state championship to cap off a perfect season. I don’t think they’ll be as dominant as they were a year ago when they outscored teams by a combined 364 to 90 throughout the year, but the program has proven to be one of the deepest in the state. I think the way they utilize their offense to dominate time of possession is a gamechanger. Head coach Jeremy Newton does a great job of finding the right fits for players in his scheme.

A big question mark will be who carries the bulk of the offense like Josh Henricks did last year rumbling for 1,451 yards and 23 touchdowns on 275 carries. Senior Kaden Rahr (664 rush yds, 5 TD) and junior Race Wilson (397 yds, 3 TD) both saw action last year. Look for seniors Ty Schlichting and Isaac Kanega along with junior Barry Kpeenu to all be fighting for touches on offense, too. At quarterback, junior Caleb Duerr is expected to take over for 3-year starter Grant Warkenthien. The defense will be anchored by Golden Gopher commit and pass rushing phenom Karter Menz. Menz racked up 12 sacks last year and is aiming even higher this season. Senior linebacker Nick Renner returns on that side of the ball, as well, and will be a key leader on a defense that needs to replace ten starters from a year ago.

A lot of people will see Mandan’s name this high and question how a team that finished 4-6 overall can be ranked at number two. It’s a fair question, but you also have to consider that five of those six losses were decided by a touchdown or less. One of the primary focuses coming off of last year for head coach Todd Sheldon is finishing in the redzone. “We racked up a ton of yards, but we didn’t score as many points as we feel we should’ve”, said Sheldon.

The Braves have plenty of star power on offense and they’re hoping they can break through for a trip to their first ever Dakota Bowl. Mandan returns its leading passer, leading rusher and top two receivers from a year ago. Senior quarterback Max Carlson passed for 1,852 yards and 15 touchdowns last fall. He’s excited about having his two favorite targets back in WDA leading receiver Karsyn Jablonski (55 rec, 1,026 yds, 7 TD; 4 Def INT) and Tahrye Frank (36 rec, 494 yds, 5 TD). The chemistry in that group continued to grow over the summer. Standout running back Lincon Wiseman returns, too, after rushing for 998 yards and nine scores in 2021. The Braves graduated some good linebackers and all-state defensive lineman Aaron Grubb but return a good number of starters on that side of the ball. Their secondary should be one of the best in the state. Their schedule is tough to start with games against Davies and Century in the opening two weeks.

It’s not too often I get to number three on this list and haven’t written Century down, but I think Mandan’s plethora of talent gives them an edge as we approach opening night. The Patriots return five starters on offense and three on defense. It shouldn’t surprise anyone that head coach Ron Wingenbach points to his offensive line and defensive line as being the groups they’ll need to rely on early in the season. That’s where they return most of their experience with senior starters Joel Edland, Jacob Burkhard and Jaxon Walz back in the fold.

The skill positions should be interesting as Kyan Barth is the front-runner for the starting QB job. He’ll have the luxury of being able to hand the ball off to standout senior Peyton Arndt who rushed for 717 yards and ten touchdowns last season. Arndt had some up and down moments last season, but he’s also battled injuries throughout his high school career. The Patriots will need some new faces to emerge as pass catchers with little varsity experience returning at that position. On defense, all-conference performer Ryan Brynjolfson is back to anchor the secondary. The aforementioned trio of senior linemen should make things difficult for opposing rushing attacks. The Patriots open the season at West Fargo on August 26th, a game you can watch live on Midco Sports.

The Deacons finished 6-5 overall last year but have proved that they definitely belong at the top division after advancing to the semifinal round last year. In fact, the Deacons were the only team to score more than 13 points against state champion Sheyenne last year. Shanley came up short to the Mustangs 36-29 in the regular season and 36-21 in the playoffs. The Deacons are tasked with trying to replace two of the most explosive playmakers in program history. John Gores and Aidan DeVine combined for almost 3,500 yards last season which was almost 90 percent of the team’s offensive production. That’s the name of the game in high school football though and new players will have to fill those roles.

Senior Michael Rostberg has the keys to the offense for a second straight season following an all-state junior campaign. The St. Thomas university commit passed for 1,666 yards and 13 touchdowns last season despite missing three games due to injury. Rostberg looked good operating Shanley’s spread offense last year and has superb arm strength that you don’t see too often at the high school level. The key for him will be establishing chemistry with his new crop of receivers. A huge benefit on offense is the return of four starting linemen that helped the team averaged over 400 yards per game last season. The defense will rely on returning starting linebacker Adam Leininger (50.5 tackles last season) to set the tone. Adam and his brother Jordan along with Isaac Perkerewicz help form a solid linebacker group while safety Landon Meier should continue to build off a strong sophomore season. Shanley heads out west to open the season at Bismarck High on August 26th.

Davies had its playoff hopes dashed four weeks into the season last year. How did they respond? They won their next four games before ending their season with a hard-fought 21-0 loss to state champ Sheyenne. I was super impressed by how the Eagles handled adversity last season. It’s that kind of finish to a season that makes more players want to buy-in to the culture being established by head coach Wayne Werremeyer. The Eagles return nine offensive starters and five defensive starters from a team that finished 6-3 last season. It’s a hungry group that’s motivated after what happened last season. “The kids have been working hard in the summer and our attendance has been good”, said Werremeyer.

The Eagles are led by their pair of NDSU commits in senior RB/LB Oliver Lucht and senior OL/DL Brennan Palmer. Lucht is a playmaker all over the field. He rushed for 200 yards and recorded 350 receiving yards last season, reaching the endzone five times on offense. On defense, Lucht made 72 total tackles using his blend of speed and physicality. Palmer is a prospect that really shined throughout the summer. He’s up to 6’4” and weighs 240 pounds. His combination of explosiveness and length will make him tough to go against in the trenches. Sophomore Mason Klabo is the expected starter at quarterback after filling in a few times last year due to injury. Klabo has quickly become one of the top basketball prospects in the state, but he’s shown some great things in his limited varsity action on the football field too. Senior Ray Brown should see plenty of targets in the pass game this fall and is one of the better secondary players in Class 11AA. Senior Eli Hayes is another linebacker to watch for that Eagle defense after he finished second on the team in tackles as a junior. Coach Werremeyer is also really confident in his offensive line saying he expects it to be as good as it has been in a long time. Davies hasn’t reached the state semifinal round since 2018, but I could see that happening in November.

The Packers had one win through three games last year, but then laid the hammer down on the rest of the competition. They didn’t lose again until the state championship game against rival Sheyenne. The offense transformed into a well-oiled machine with Parker Nelson running wild and Peyton Jantzi hitting receivers like Carson Hegerle and Caden Zepeda for huge gains. All four of those weapons are gone, but head coach Jay Gibson always seems to embrace the pressure that comes along with keeping the Packers as a playoff contender. I’m already questioning my decision not to rank them in the top five.

The top returning player for West Fargo is all-state FB/LB Josh Balstad who was a man amongst boys at times on the field last year. Balstad embraced the blocking back role and helped pave the way for Parker Nelson to rush for nearly 140 yards per game and 24 touchdowns on the season. He maintained his physical play on defense where he racked up an EDC-best 100 tackles and 8 TFL. He’s going to leave a lot of opposing players with sore bodies on Saturday mornings this year. The defense also returns senior linebackers Kaleb Porter and Cole Tiedeman behind a veteran defensive line. The secondary will have some fresh faces. On offense, I’m interested to see who takes over the carries left behind by Nelson. It sounds like it’ll be a mix of Balstad, Max Pfau and twin brothers Kaleb and Tyler Porter. Tiedeman will take over the reigns at quarterback and I expect WR/DB Payton McGregor to really splash in his senior season.

The Demons had a season to forget last year. Things turned sour quickly following the season-ending injury to all-state running back Isaiah Huus. The three wins were their fewest since 1994. But the hope is that by working some younger players into the rotation last year that Mark Gibson’s team can turn things back around in 2022. Senior Hudson Schroeder and junior Ashtyn Mosolf both gained valuable experience at running back a season ago. Schroeder led the team with 460 rushing yards and five touchdowns. He’ll be running behind some really promising young linemen in junior Luke Dockter and 6’6” 300 lb sophomore Jake Shaffer. A lot of those same names will be counted on to make plays on defense along with returners like Carter Henke, Preston Lemar, Traiden Kalfell and Ty Allen. Last year was full of lumps, but I expect the Demons to have a much better season in 2022.