The 2022 high school volleyball season wrapped up with a thrilling state tournament that featured several matches going the distance including both the Class A and Class B state championships! Congrats to the Northern Cass Jaguars who pulled off the 5-set victory over back-to-back state champ Linton-HMB! And another congratulations goes out to the West Fargo Sheyenne Mustangs who dethroned back-to-back Class A defending state champ Bismarck Century in five sets! With the season in the rear-view mirror, it’s time for us to honor some of the top players in each class highlighted by our Midco Sports Player of the Year finalists in each class. We emailed all the coaches across the state to get nominations. We compiled that information and then had the always challenging task of selecting two player of the year finalists and honorable mentions. Now, we need your help in voting between the two finalists to help crown our Midco Sports Player of the Year winners sponsored by North Dakota Farmers Union Insurance.

If you don’t see a player that’s worthy of being mentioned, please reach out and submit their name/school and stats. I’ll do my best to add them. Email jody.norstedt@midco.com. We apologize in advance because it’s inevitable that some worthy individuals will get missed for a variety of reasons. Also, we can’t guarantee that the stats below are 100% accurate because they were gathered at various times throughout the postseason. Thank you for taking the time to visit the blog and congrats to every player across North Dakota because you just completed a season that requires a lot of hard work, sacrifice and commitment! 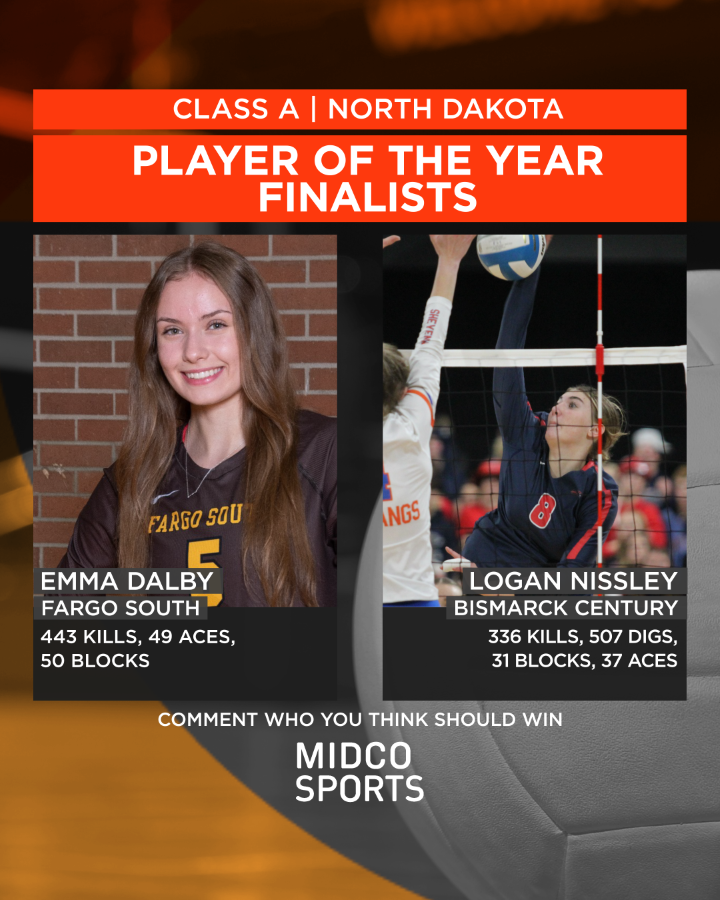 Player of the Year Finalists

Nissley opened the season on somewhat of a pitch count as she was recovering from off-season surgery on both of her feet. It didn’t take her long to get back to full strength and dominate the volleyball court. Nissley finished the season with 336 kills, 507 digs and 31 blocks. She also showed her precision at the service line recording 37 aces. During the state championship match, Nissley surpassed the 1,000 kill milestone for her career. Nissley was named NDHSCA senior athlete of the year and earned 1st team all-state honors for the third consecutive season. She’s committed to play college basketball at the University of Nebraska, but she’ll go down as one of the top volleyball players in state history.

Dalby helped resurrect the Fargo South volleyball program by getting the Bruins back to the state tournament for the first time since 2014. Dalby pounded down an impressive 443 kills and added 50 blocks at the net along with 49 aces from the service line. Bruins head coach Peyton Wegleitner says, “She was a force to be reckoned with all season, and is a phenomenal student-athlete and teammate.” Dalby averaged over 4 kills per set on the year and like Nissley, eclipsed the 1,000 kill milestone for her career this season. She finishes her career as a 2-time all-state selection and was certainly one of the toughest hitters to defend in the state. 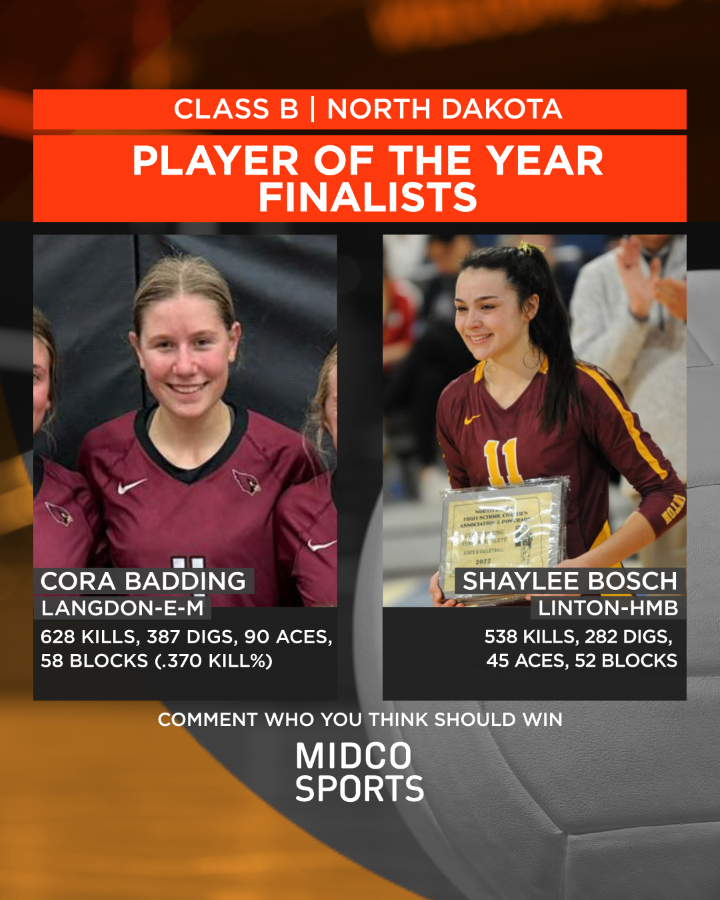 Player of the Year Finalists

Bosch wrapped up her career by playing in the Class B state championship match for the 3rd consecutive season. The Linton-HMB Lion senior is a terrific all-around player as evidenced by her superb stat line of 538 kills, 282 digs, 45 aces and 52 blocks. Bosch, who was named Class B state senior athlete of the year, finished her career with 1,148 kills and 180 blocks. She teamed up with fellow senior standout Gracie Schumacher to lead a relatively inexperienced squad to the state championship. Linton-HMB head coach Jaime Richter has a lot of praise for Bosch, “she sees the court very well and will find that spot if it’s open. ShayLee is a great blocker and finds a way to close a block.”

If there was such a thing as a comeback player of the year in high school, Badding would win that trophy easily. She also might have just had the best season overall by any individual this season. Badding suffered a season-ending knee injury as a sophomore but came back with a monster season as a junior recording 628 kills, 387 digs, 90 aces and 58 blocks. She recorded those big numbers despite the Cardinals not qualifying for the state tournament. Badding’s 628 kills came on an impressive .370 kill percentage. Cardinals head coach Rich Olson says that Badding’s season “is one of the top seasons I have ever seen in terms of offensive impact.” Despite missing nearly all of her sophomore season, Badding will enter her final season next year with 1,125 kills already under her belt. Badding was one of four non-seniors to be selected for the Class B all-state volleyball team this fall.

Others nominated in Class A and Class B