Let's hope the Class A boys basketball season picks up right where it left off last spring with a thrilling state tournament. Minot was the last team standing at the Bismarck Civic Center last year after knocking off West Fargo on championship night. The Magi graduated three talented seniors, but do return state tournament MVP and NDSU commit Darik Dissette. I expect them to make a serious push for back-to-back state titles, but it'll be tough with a loaded Bismarck Century group returning with their own championship aspirations. The east is deep with contenders, too, and it should make for another entertaining year in Class A hoops. Read more about my team rankings and players to watch below.

I had Bismarck Century in this same spot last year and they ended up finishing runner-up in the WDA and settling for a fifth-place finish at state. Darin Mattern returns nearly the same group led by a senior class that has logged a ton of varsity minutes. The Patriots are spearheaded by a couple of D1 commits in star guard Anthony Doppler (17.3 ppg, 3.3 apg) and 6’10” post Ryan Erikson (14.7 ppg, 11.4 rpg) who have already chosen to play for Paul Sather and the University of North Dakota next winter. Doppler is a versatile guard that can score in a variety of ways and shares the ball well. Erikson has been a walking double-double each of the last two seasons. Minot State commit William Ware (10.3 ppg, 5 rpg) and standout junior Isaiah Schafer (16.4 ppg, 89 treys) are a couple of other dynamite talents for Century. Schafer can shoot the lights out. He led the state last year with 89 triples and shot around 44% from deep. This is a team full of scoring options that also counters with good length that can cause havoc defensively. The talent is there for a state championship run, but now it’s time to see if they have the grit to get it done.

Last year, I pegged Minot at #5 in my preseason poll and it motivated them so much that they won the state championship. That’s how this works, right? Jokes aside, Minot played outstanding last year and finished 25-2 adding some hardware to the trophy case thanks to a dramatic run at state which featured three combined overtime periods between the quarterfinal and semifinal round. Minot will have to replace a trio of seniors led by all-state pick Eric Wentz, but I feel they have plenty of talent to do so. The motor for the Magi is 6’4” senior Darik Dissette (22 ppg, 8.1 rpg, 32 blk) who recorded a double-double in all three games at state last year en rout to being named tournament MVP. His combination of talent and ultra-competitiveness made him my selection for preseason player of the year in this division. The NDSU commit has a ton of skill, but improvements to his perimeter shooting and passing could take his game to the next level. It’s not just Dissette that opposing teams have to defend. Morgan Nygaard, Jaeger Gunville, Logan Conklin and Aric Winczewski are all proven scorers at the varsity level. Gunville and Winczewski combined to make 78 3-pointers last season. Don’t be surprised if Minot is playing in the state championship game for a third consecutive season.

After back-to-back trips to state, the bar continues to get set higher and higher for a Spartans team that returns two of the top players in the state in juniors Jeremiah Sem (22 ppg, 5 rpg, 66 stl, 34 treys) and Carter Zeller (14 ppg, 7 rpg). Remember it was Fargo North who was seconds away from knocking off eventual state champ Minot in overtime in the quarterfinal round at state last March. Travis Hoeg took over coaching duties midway through the season and had the Spartans playing really well down the stretch and I expect that trend to carry over into the 2022-23 campaign. Sem is an elite three-level scorer that can take over games at any point. He’s also become one of the more explosive high school dunkers this state has ever seen. Zeller has been steady ever since bursting onto the varsity scene a few years ago. He’s a great rebounder and finisher around the rim. Is this the year the Spartans turn their potential into some precious hardware? Time will tell.

The Eagles are coming off an outstanding season in which they swept the EDC regular season and tournament titles capping things off with a third-place finish at the state tournament. Despite graduating all-state point guard Ian Motschenbacher, the Eagles return a lethal backcourt with senior guard Raymond Brown (13 ppg, 78 stl, 68 ast, 44 treys) and sophomore guard Mason Klabo (23 ppg, 6 rpg, 113 ast, 74 treys). Klabo is a division one talent and puts so much pressure on defenses by being able to score from anywhere on the court. He was the Eagles starting quarterback this fall and you could really see him evolve as a leader which will be key on the hardwood, too. Brown has developed into one of the top 2-way players in the state. You can anticipate Bart Manson putting his senior guard on the opposing team’s top scoring threat on most nights. The Eagles were planning to have three starters back from last season, but standout forward Max Froslie suffered a torn ACL in the offseason and will miss his entire senior season. The U Mary commit averaged seven points and four rebounds per game last season. Head coach Bart Manson is excited to see his team hit the floor but understands his team will have to overcome some adversity if they want to reach their goals this winter. “We should have a competitive young team again this year. There are some challenges that we face as we enter the season. With the loss of Max Froslie we don't have a lot of size in our program, so we will be one of the smaller teams in the league.” Even with the loss of Froslie, I see the Eagles scoring a ton of points this year and making a push to repeat as kings of the EDC.

In the second half of last season, Red River was playing as good as anyone in the state. The Roughriders won seven of their final eight games including victories over Sheyenne and West Fargo. Then things fell apart in the postseason with losses to Shanley and Central in the region tournament. Red River will run it back with a lot of key pieces still in place. 6’2” senior point guard Zach Kraft is the engineer of the offense. He averaged over 15 points per contest as a junior and finished with 60 made triples including eight in one game. Last year, he really showed that there’s more to his game than just outside shooting. He became really tough to guard off the dribble and that led to him setting up more teammates for open shots. 6’3” senior Reis Rowekamp (14.6 ppg, 4.2 rpg, 58 ast) is coming off a strong junior season, as well. Rowekamp does all the little things well and he has a midrange game that not many in the state can match. I had more than one coach tell me in the offseason that Rowekamp might be the most underrated player in Class A. I didn’t have room for him in my top players to watch below, but I’m guessing he won’t be disappointed in having some extra motivation in his final season for the Roughriders. 6’7” senior post Carter Byron and 6’4” senior Logan Arason help provide the interior scoring and rebounding. I expect sophomore guard Pearce Parks to make a big leap in production this winter after averaging five points per game as a freshman. The Roughriders don’t have to search too hard for motivation. Something tells me that they’ll be a motivated group this winter. 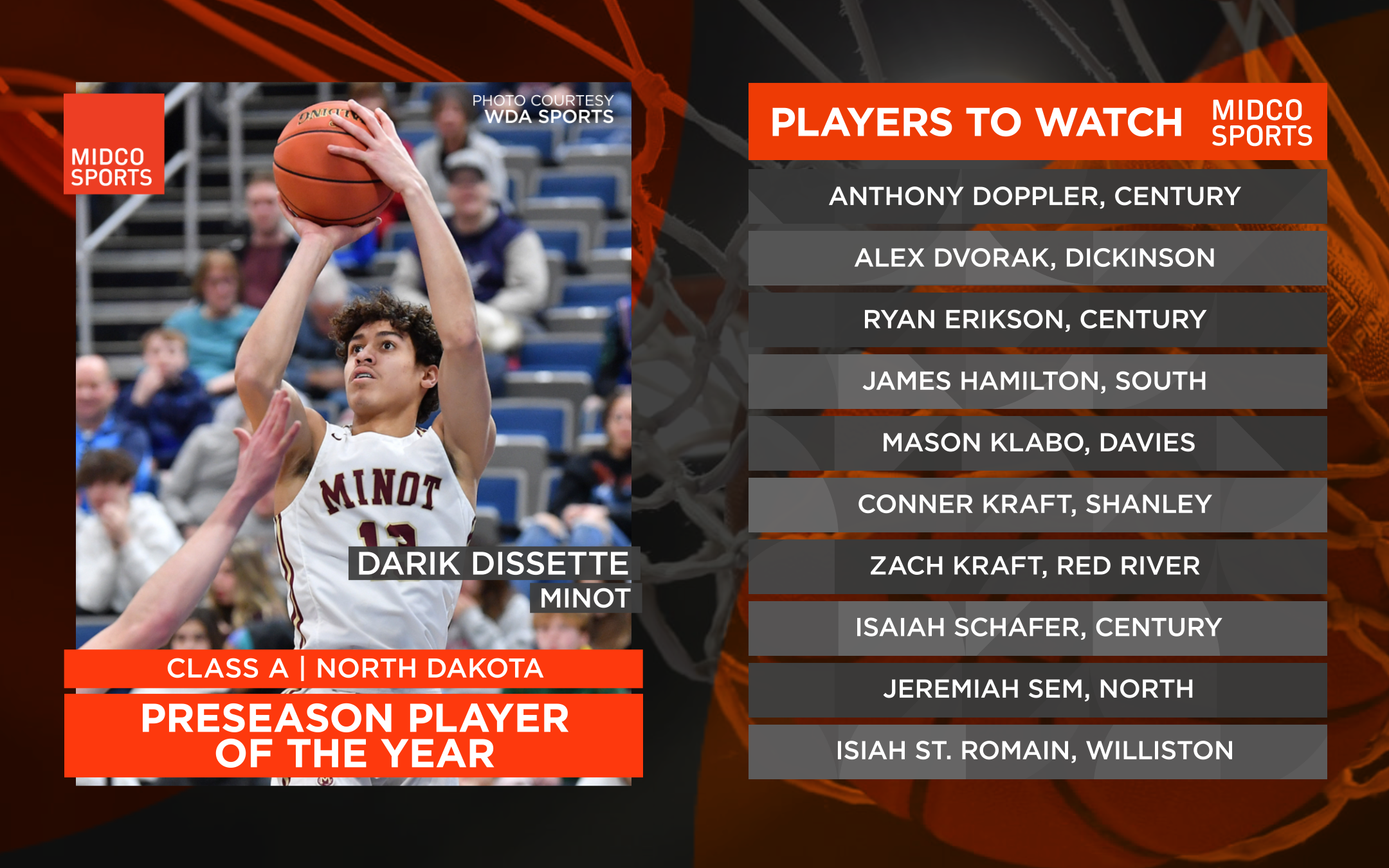