Fourteen deserving individuals and two teams will be immortalized in the South Dakota High School Baseball Hall of Fame this year.

The new class of Enshrinees joins last year’s inaugural class to form the foundation for the SDHSBA’s 21-year history. 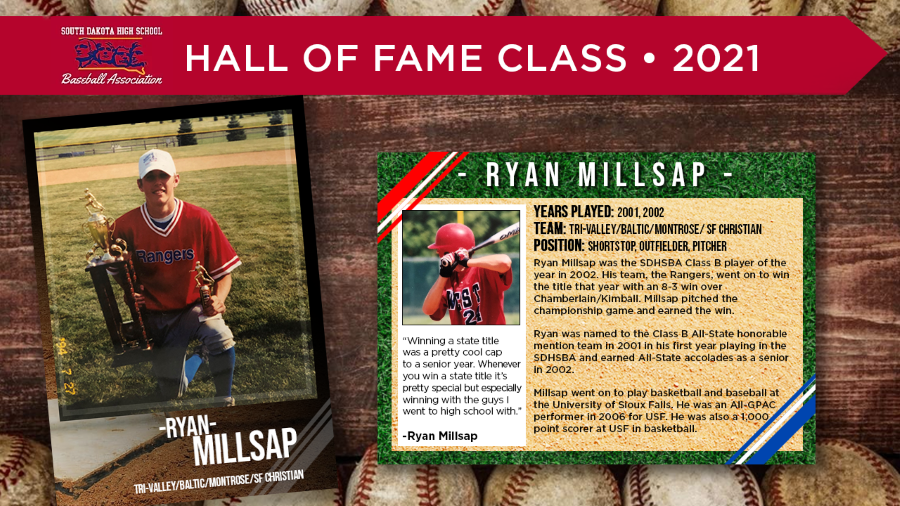 Ryan Millsap has a lot of great memories playing ball in high school but he remembers the state championship in 2002 the best.

His team, the Rangers, went on to win the title that year with an 8-3 win over Chamberlain/Kimball. Millsap pitched the championship game and earned the win.

Career highlights included being named to the Class B All-State honorable mention team in 2001 in his first year playing in the SDHSBA and then earning All-State accolades as a senior in 2002 as well as the SDHSBA Class B player of the year.

Millsap went on to play basketball and baseball at the University of Sioux Falls. He was an All-GPAC performer in 2006 for USF. He was also a 1,000-point scorer at USF in basketball. 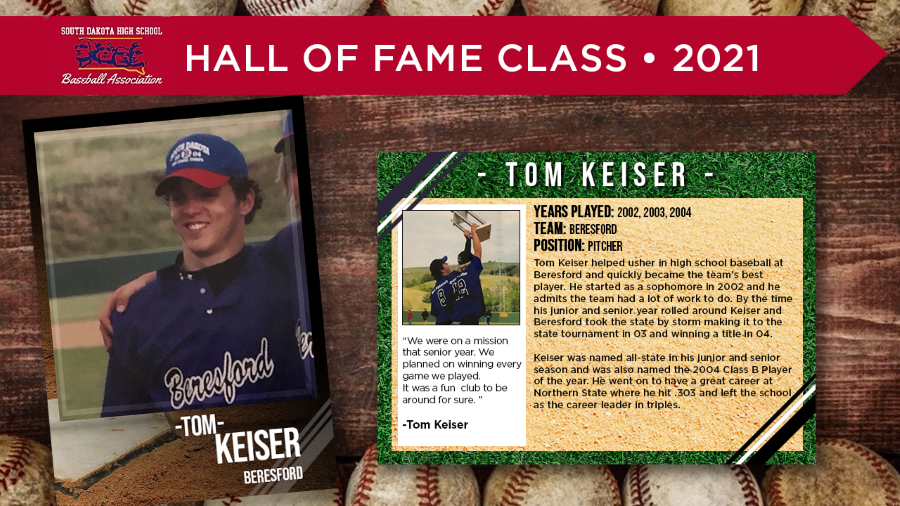 Tom Keiser helped usher in high school baseball at Beresford and quickly became the team’s best player. He started as a sophomore in 2002 and played three years for the team. By the time his junior and senior year rolled around Keiser and Beresford took the state by storm making it to the state tournament in 2003 and winning a title in 2004.

Keiser was named all-state in his junior and senior season and was also named the 2004 Class B Player of the year. He went on to have a great career at Northern State where he hit .303 and left the school as the career leader in triples. 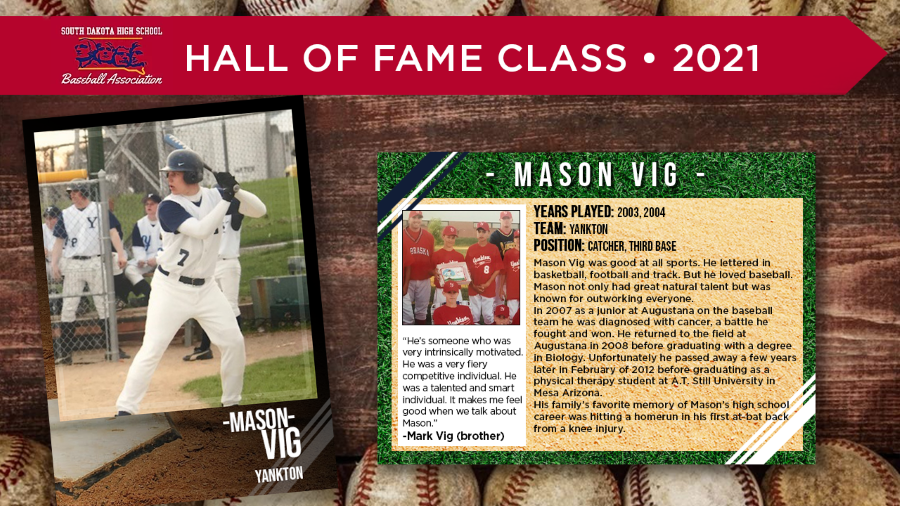 One of the top all-around athletes to play baseball at Yankton was Mason Vig. Although Mason lettered in basketball, football and Track, his love for baseball always shined through.

He was one of the most feared hitters in a loaded Yankton Lineup in 2003. But injuries kept him out of most of the spring season in 2004. But Mason made a memorable comeback in his first at bat after injury with a home run in his first plate appearance back in the lineup.

Mason went to play baseball at Augustana. In his junior year of college he was diagnosed with cancer. He fought cancer and made a full recovery and returned to the baseball field as a senior. Mason won the 2009 Mark Mehlhaf Amateur Baseball Award, for his comeback against cancer.

Unfortunately, he died a few years later in February of 2012 before graduating as a physical therapy student at A.T. Still University in Mesa Arizona. He will be remembered as one of the greats to ever play for Yankton. 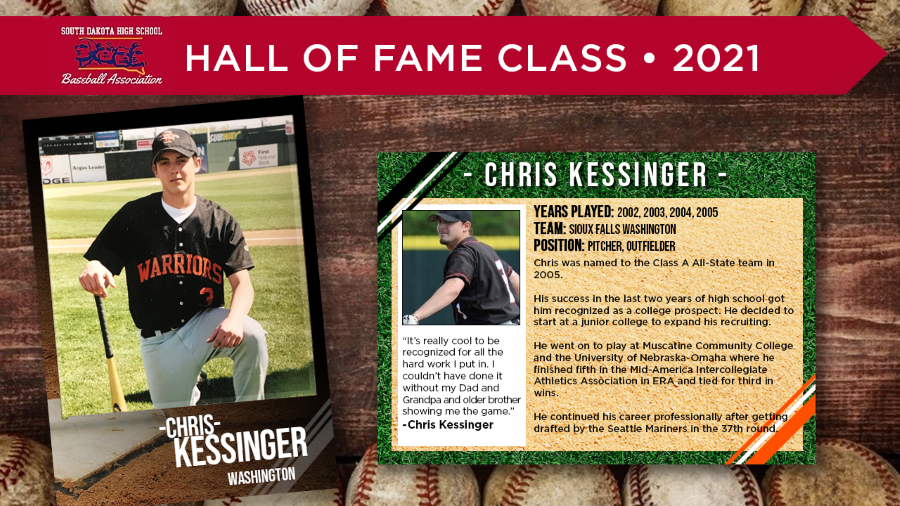 Chris was named to the Class A All-State team in 2005 for the Washington Warriors. His success in the last two years of high school got him recognized as a college prospect. He decided to start at a junior college to expand his recruiting.

He went on to play at Muscatine Community College and the University of Nebraska-Omaha where he finished fifth in the Mid-America Intercollegiate Athletics Association in ERA and tied for third in wins.

He continued his career professionally after getting drafted by the Seattle Mariners in the 37th round. 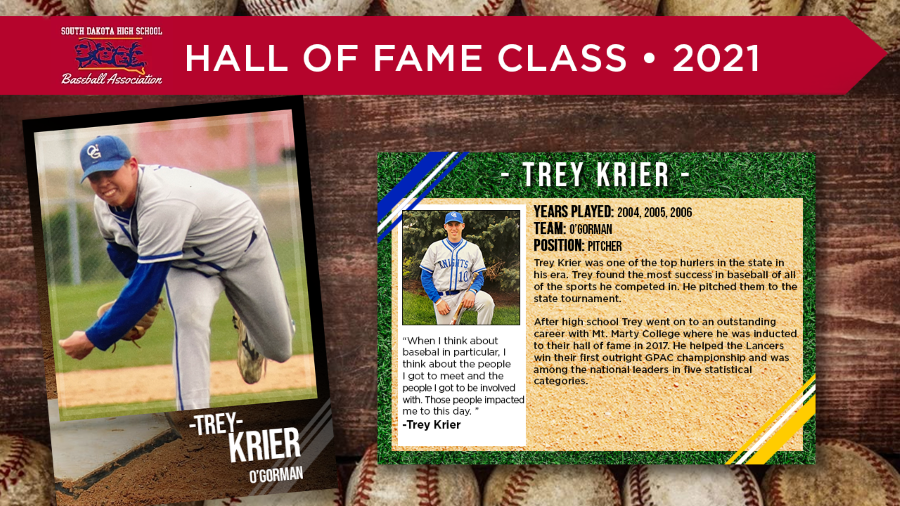 Trey Krier was one of the top hurlers in the state in his era. Trey found the most success in baseball of all the sports he competed in. He pitched O’Gorman to the state tournament.

After high school Trey went on to an outstanding career with Mt. Marty College where he was inducted to their hall of fame in 2017. He helped the Lancers win their first outright GPAC championship and was among the national leaders in five statistical categories. 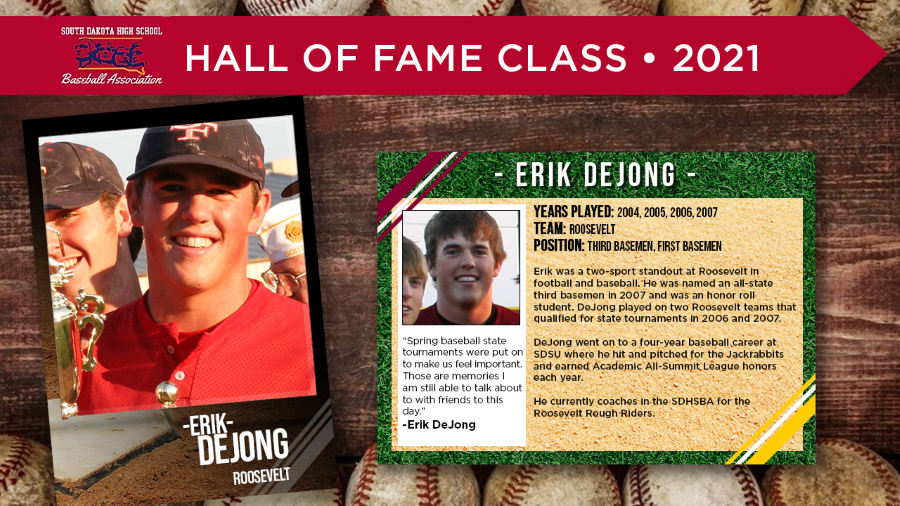 Erik was a two-sport standout at Roosevelt in football and baseball. He was named an all-state third basemen in 2007 and was an honor roll student. DeJong played on two Roosevelt teams that qualified for state tournaments in 2006 and 2007.

DeJong went on to a four-year baseball career at SDSU where he hit and pitched for the Jackrabbits and earned Academic All-Summit League honors each year.

He currently coaches in the SDHSBA for the Roosevelt Rough Riders. 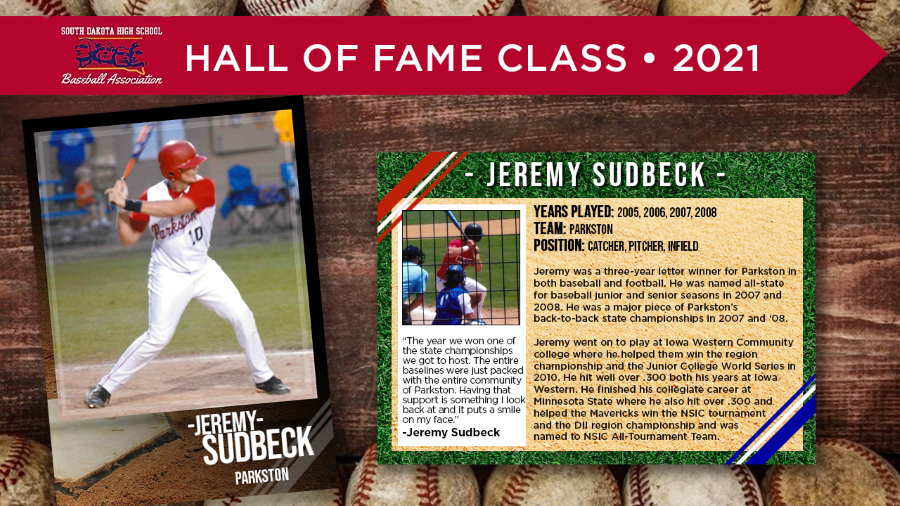 Jeremy was a three-year letter winner for Parkston in both baseball and football. He was named all-state for baseball junior and senior seasons in 2007 and 2008. He was a major piece of Parkston’s back-to-back state championships in 2007 and 08.

Jeremy went on to play at Iowa Western Community college where he helped them win the region championship and the Junior College World Series in 2010. He hit well over .300 both his years at Iowa Western. He finished his collegiate career at Minnesota State where he also hit over .300 and helped the Mavericks win the NSIC tournament and the DII region championship and was named to NSIC All-Tournament Team. 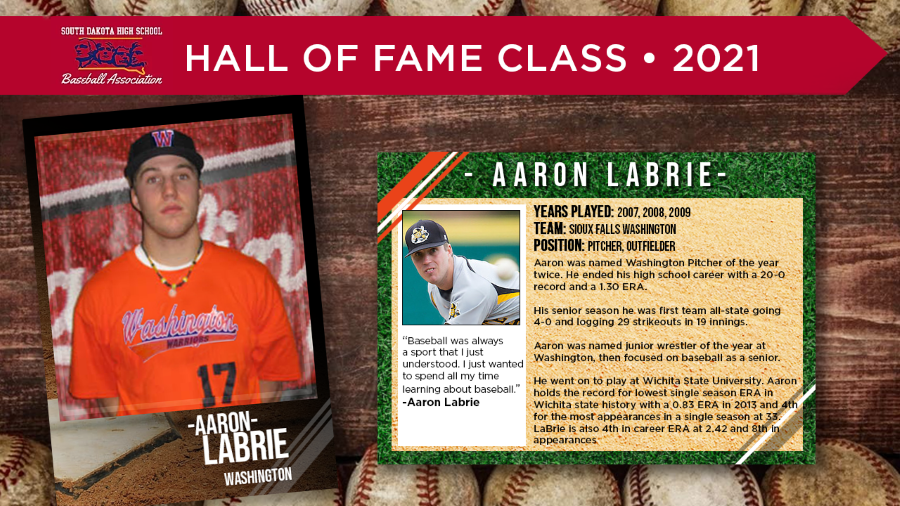 Aaron was named Washington Pitcher of the year twice. He ended his high school career with a 20-0 record and a 1.30 ERA. His senior season he was first team all-state going 4-0 and logging 29 strikeouts in 19 innings.

He went on to play at Wichita State University. Aaron holds the record for lowest single season ERA in Wichita state history with a 0.83 ERA in 2013 and 4th for the most appearances in a single season at 33. LaBrie is also 4th in career ERA at 2.42 and 8th in appearances. 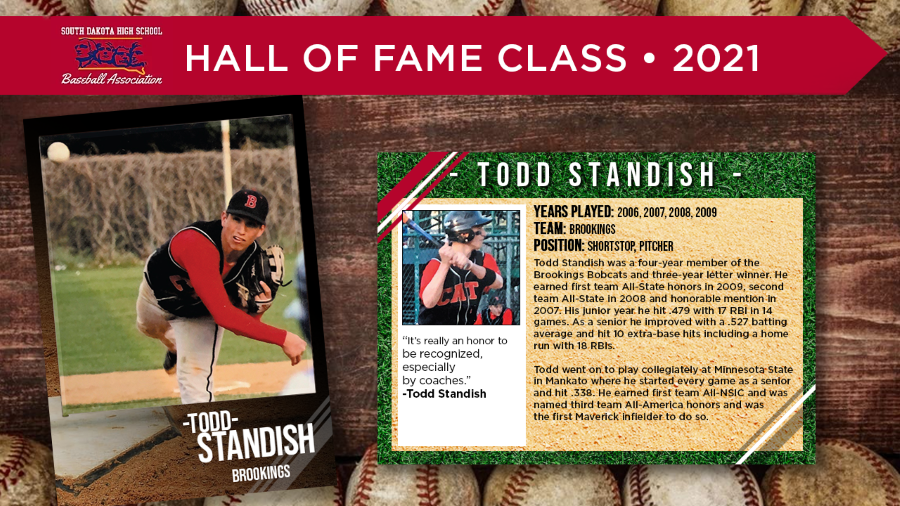 Todd Standish was a four-year member of the Brookings Bobcats and three-year letter winner. He earned first team All-State honors in 2009, second team All-State in 2008 and honorable mention in 2007. His junior year he hit .479 with 17 RBI in 14 games. As a senior he improved with a .527 batting average and hit 10 extra-base hits including a home run with 18 RBIs.

Todd went on to play collegiately at Minnesota State in Mankato where he started every game as a senior and hit .338. He earned first team All-NSIC and was named third team All-America honors and was the first Maverick infielder to do so.

Brett Young got moved up to the varsity team as a freshman and helped sparked the team to a state championship in 2006. He was named all-state as a junior hitting .328 and led Class A with 21 RBIs. His senior season Mitchell won another state title. He pitched a complete game in the semifinals to get Mitchell to the championship game. He was named first team all-state with a 1.22 ERA and 24 strikeouts in 23 innings.

Brett also excelled in the classroom, compiling perfect 4.0 grade-point average and earning distinction as class valedictorian. He went on to play at South Dakota State University.

Eric earned all-region and all-state honors after a phenomenal senior season. He recorded a 1.23 ERA with 26 strikeouts in 14.2 innings on the mound. He batted .437 and hit five home runs, had 46 runs batted in and had a .711 slugging percentage during senior year. His junior year he hit .636 and as a sophomore he was an honorable mention All-Region player. He lettered four times in high school baseball. He was also an academic all-state selection and honor roll student.

He went on to play at SDSU where he hit .360 as a senior and started in 49 games in the outfield. 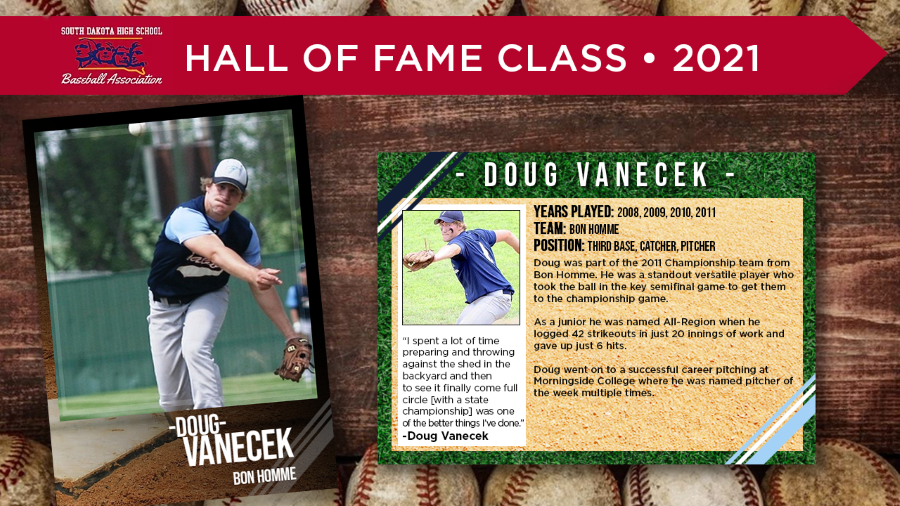 Doug was part of the 2011 Championship team from Bon Homme. He was a standout versatile player who took the ball in the key semifinal game to get them to the championship game.

As a junior he was named All-Region when he logged 42 strikeouts in just 20 innings of work and gave up just 6 hits.

Doug went on to a successful career pitching at Morningside College where he was named pitcher of the week multiple times. 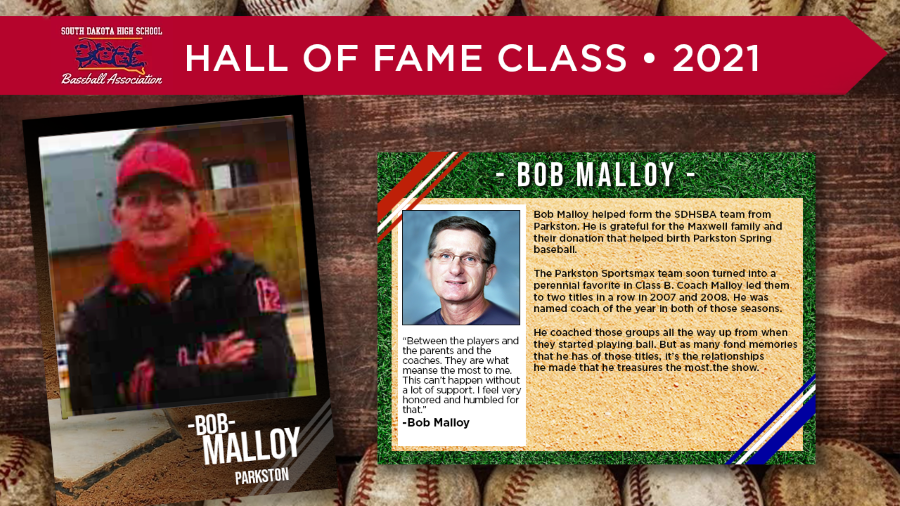 Bob Malloy helped form the SDHSBA team from Parkston. He is grateful for the Maxwell family and their donation that helped birth Parkston Spring baseball.

The Parkston Sportsmax team soon turned into a perennial favorite in Class B. Coach Malloy led them to two titles in a row in 2007 and 2008. He was named coach of the year in both of those seasons. 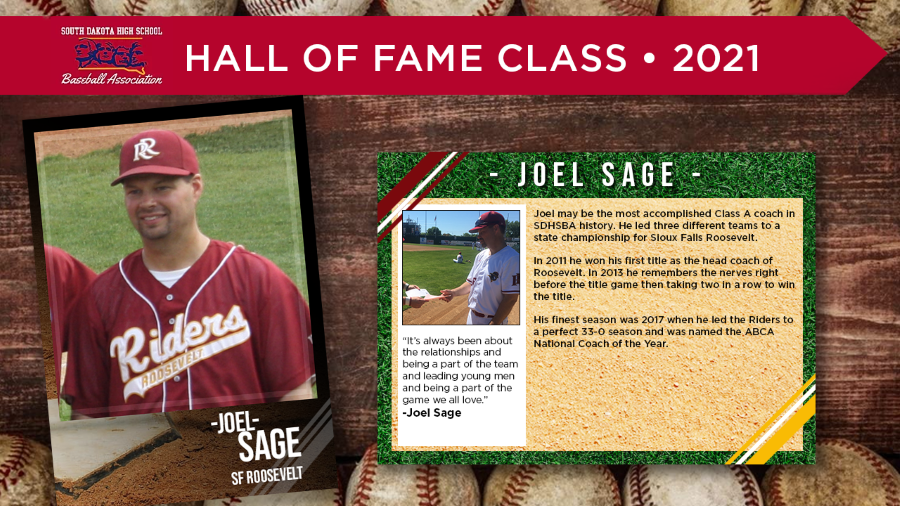 Joel may be the most accomplished Class A coach in SDHSBA history. He led three different teams to a state championship for Sioux Falls Roosevelt.

In 2011 he won his first title as the head coach of Roosevelt. Then just two years later he won the title again in 2013.

His finest season was 2017 when he led the Riders to a perfect 33-0 season and was named the ABCA National Coach of the Year. 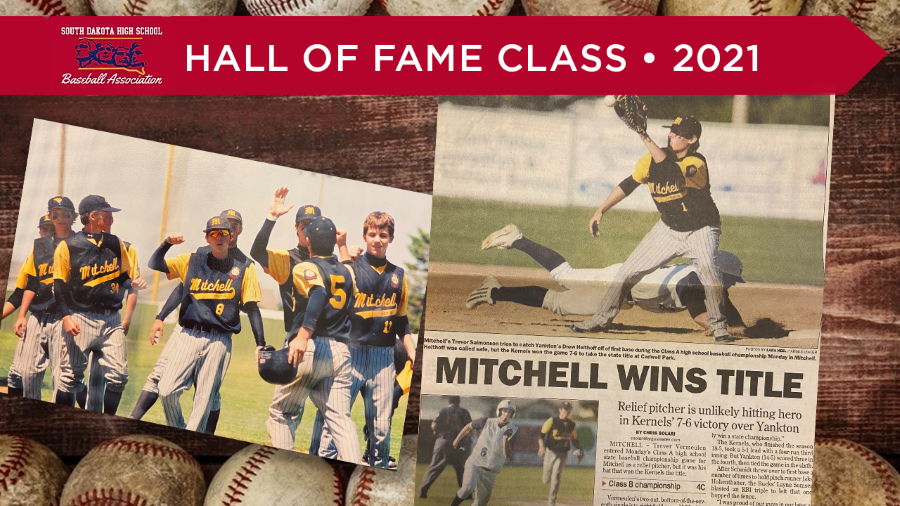 The 2006 Mitchell Kernels had one of their best teams in school history. And they did it with a very young team. That team had just one senior with a junior-heavy roster. The team also included Hall of Famers Jason Schmidt, who was just a sophomore, and Brett Young, who was a freshman.

That Mitchell team will go down as one of the most talented teams in South Dakota High school baseball history. 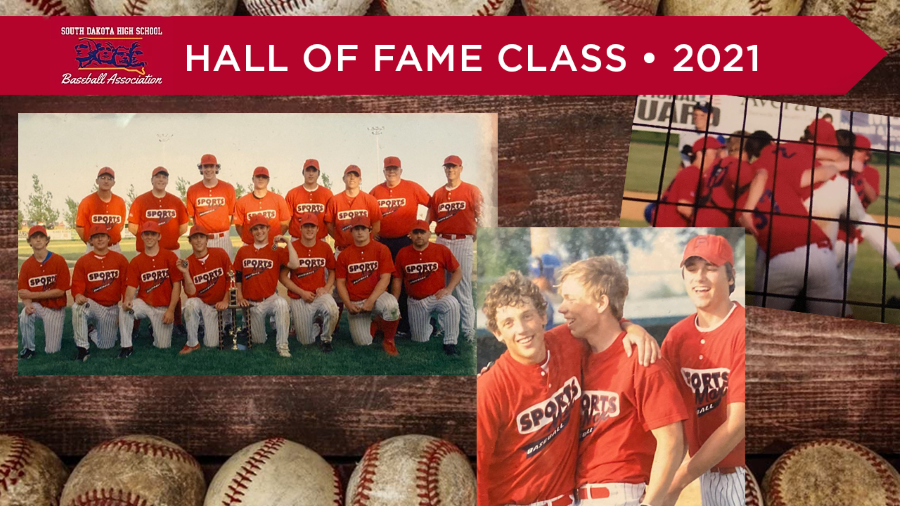 Parkston is a town rich in baseball tradition. They added to that legacy when they added a school team to the SDHSBA and got right to work with a championship run in 2007.

Parkston went on to win consecutive titles in 2008 as well and continues to be a proud baseball town.