Let the battle begin! I don’t know how it’ll all shake out in the end, but I feel like this season has a chance to be one of the most competitive years in Class A boys basketball in quite some time. My preseason number one will just be trying to make it back to state after a two-year absence. Meanwhile, the four teams that I have listed on the bubble of being in the top five boast some of the top prospects in the state. Be prepared for surprises this year and perhaps more importantly, enjoy the talent level because it continues to improve. Read more about my team rankings and players to watch below.

Despite missing out on the state tournament in back-to-back seasons, the Patriots have become the trendy preseason pick to win it all this season. Consider me one of those onboard with that prediction. Darin Mattern enters his 13th season with a great mix of varsity experience and elite talent. A few years ago, players like Anthony Doppler, William Ware and Ryan Erikson were freshmen earning varsity minutes. Now, that trio hopes to lead the Patriots to the program’s first state since 2018. Doppler (12.6 ppg, 6.1 rpg, 44 stls) is a versatile player that has the ability to score at all three levels. The 6’4” guard is a gym rat that continues to get better and better and was my unofficial 11th man on my top 10 players to watch list. He has some unreal potential and should be in for a monster season. Erikson is now up to 6’10” according to his head coach and he’s very skilled for his size. He nearly averaged a double double last season (13 ppg, 9.6 rpg) and if he continues to add more strength, I’m not sure there will be a player in Class A that’ll be able to matchup with him the next two seasons. Ware (8.1 ppg, 5.1 rpg) and sophomore guard Isaiah Schafer (12.3 ppg, 48 treys) are also set to be key contributors for the Patriots this winter.

The defending state champs check in at number two following their outstanding 2020-21 season. Although, I feel that there’s a strong case that could be made for them to be the preseason number one. Speaking of strength, head coach Adam Palczewski is tasked with replacing the strong-bodied post player Carter Birrenkott (23 ppg, 10 rpg) who was a Mr. Basketball finalist and the Midco Sports Class A Player of the Year last season. The good news is that the Packers return a trio of starters Carson Hegerle 18.4 ppg, 6.5 rpg, 73 asts), Brett Limke (13.8 ppg, 107 asts, 65 treys) and Parker Nelson (6.8 ppg, 3.8 rpg, 52 stls). Hegerle, an NDSU football commit, is a gifted score that is exceptional on the drive. He’s also one of the top defenders in the EDC. Limke has the keys to the offense once again and is a point guard that seems to make all the correct decisions. Nick Carlson waited in the wings last year behind Birrenkott and Joel Pease, but look for him to become one of the top rebounders and consistent scorers in Class A.

There won’t be a team more inspired than the St. Mary’s Saints this season following the passing of head coach Brent DeKok. DeKok was a fighter and remained positive throughout his battle with cancer and you can bet that his team will hope to do him proud this winter. Garett Bader (14.9 ppg) is the top returning scorer for the Saints and hit 55 triples last year on 40% shooting from outside. That’s where the Saints can hurt you as a team, too. St. Mary’s led the WDA in 3-pt FG percentage last season hitting over 38%. Evan Gross (11.8 ppg, 8 rpg) also has all-conference potential with what he’s capable of on offense and defense. Nate Fedorchak is the third returner that averaged double digits in scoring last season. Look for him to hit another level as a senior with confidence. The Saints will be one of the most senior-laden teams in the state and that should give them a distinct advantage as they look to make huge improvements following last year’s 9-14 campaign.

The Mustangs may not be entering this season with as many proven players as in years past, but this is a program that’s proven to be a consistent winner in its relatively short time of existence. Tom Kirchoffner’s Mustangs haven’t suffered more than five losses in a season since finishing 17-10 in the 2016-17 season. Since that season, they’ve combined to go 88-14 with one runner-up finish and a pair of final four trips at state. The two known commodities returning are seniors 6’8” Dominic Dosmann (6.3 ppg, 4.4 rpg, 65 asts) and 6’7” Michael Nhial (6.8 ppg, 4.4 rpg, 28 treys). Both were role players last season but will need to step up their production and leadership in order for this team to reach its ultimate goal. Senior Kaleb Larson is a player that has put in a lot of work and should emerge as one of the team’s leading scorers. He’ll be among the EDC leaders in 3-point field goals this season. 6’5” senior Zander Newton showed his athleticism at receiver for the state champion football team. Look for him to provide the Mustangs with a reliable rebounder and defender.

No team surprised people more last year than Minot. The Magi were picked to finish in the middle of the pack in Class A and ended up putting together a 23-2 season, claiming both the WDA regular season and tournament crowns. They fell short in the championship game to West Fargo by a score of 65-60. There will be a void left behind by departed senior and Class A senior athlete of the year Deonte Martinez. He was the heart and soul of that team last year, but the hope is that the returning varsity starters will embrace that role. Senior Eric Wentz (14.6 ppg, 3.6 rpg, 45 treys) and junior Darik Dissette (14.6 ppg, 3.5 rpg, 27 blks) are the returning starters and both made the all-WDA team a season ago. Seniors Owen Iverson and Brice Domsteen flourished for the JV squad last winter and there’s optimism they’ll be able to continue their upward trend. There might be some bumps in the road early, but I feel that Minot will be right in the WDA championship mix by season’s end.

Full transparency. Of the four combined classes of North Dakota boys and girls basketball, I found these rankings to be the absolute toughest. I only included four bubble teams, but I feel strong cases could be made for Legacy and Shanley too with their high-level talent. See: Zander Albers (Legacy) and Kraft brothers (Shanley). Davies has a stud in Northern State commit and senior Ian Motschenbacher (17 ppg, 5 apg) and I think freshman Mason Klabo (22 treys, 76 asts as 8th grader) has the skillset to become a multi-year all-state pick. Bismarck senior guard Treysen Eaglestaff, a UND commit, is the top returning scorer in the state and will likely be a Mr. Basketball finalist. My concern for the Demons is finding reliable scoring options around him. Teams are going to throw double and triple teams at Eaglestaff (23 ppg, 6.6 rpg, 69 steals, 80 treys) and players like Ethan Stotz, George Gillette and Preston Lemar will have to take advantage of their opportunities. Fresh off a surprise state trip last year, North is hoping to take the next step led by superstar sophomores Jeremiah Sem (21.7 ppg, 5.5 rpg) and Carter Zeller (12 ppg, 6.8 rpg). Red River is another team I could see making a big leap. Senior Paine Parks (17.5 ppg, 7.5 rpg) will be one of the top post players in the EDC and junior guard Zach Kraft (15 ppg, 3 rpg, 88 treys) can shoot the lights out. Prepare yourselves for a very competitive winter in Class A boys hoops! 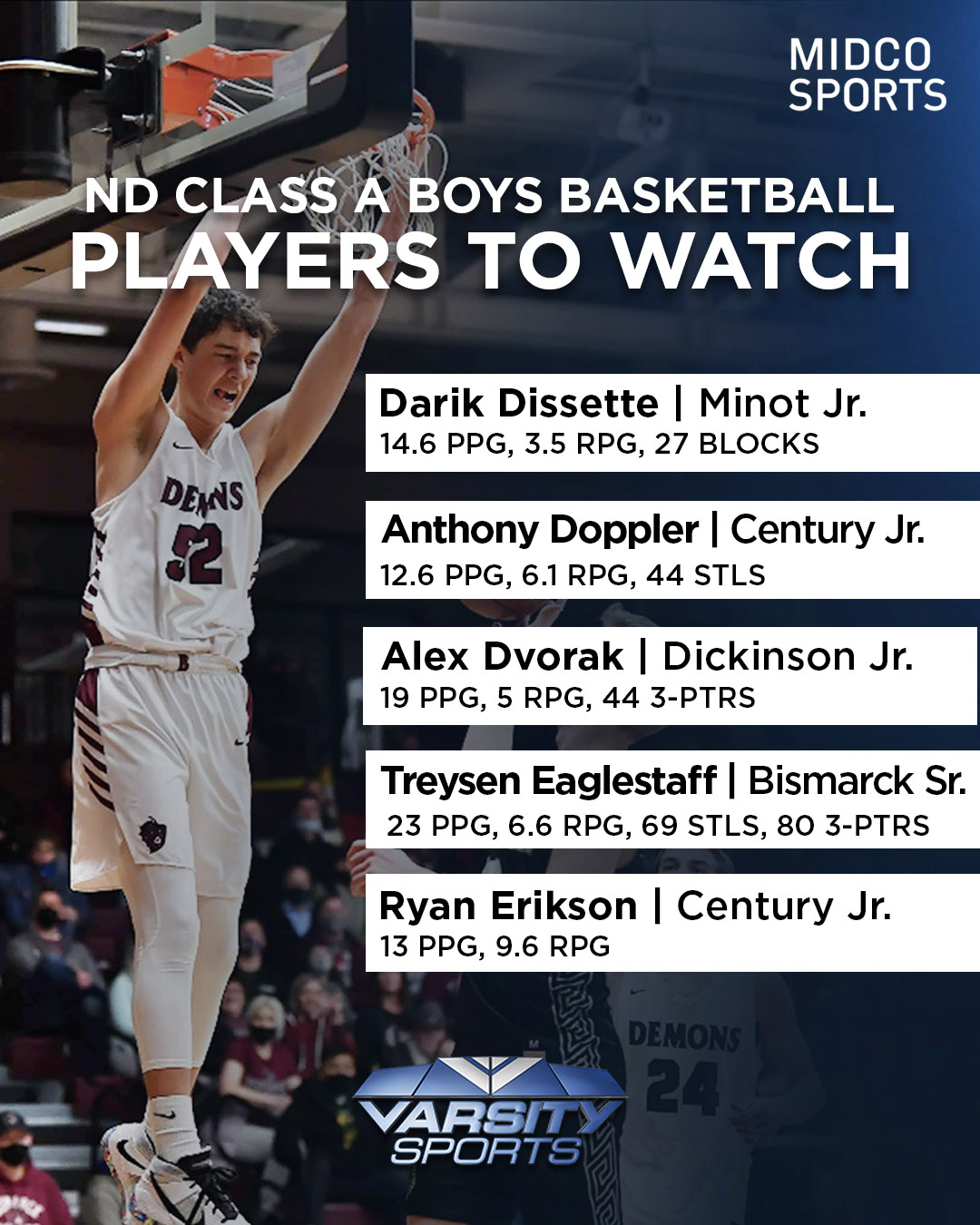 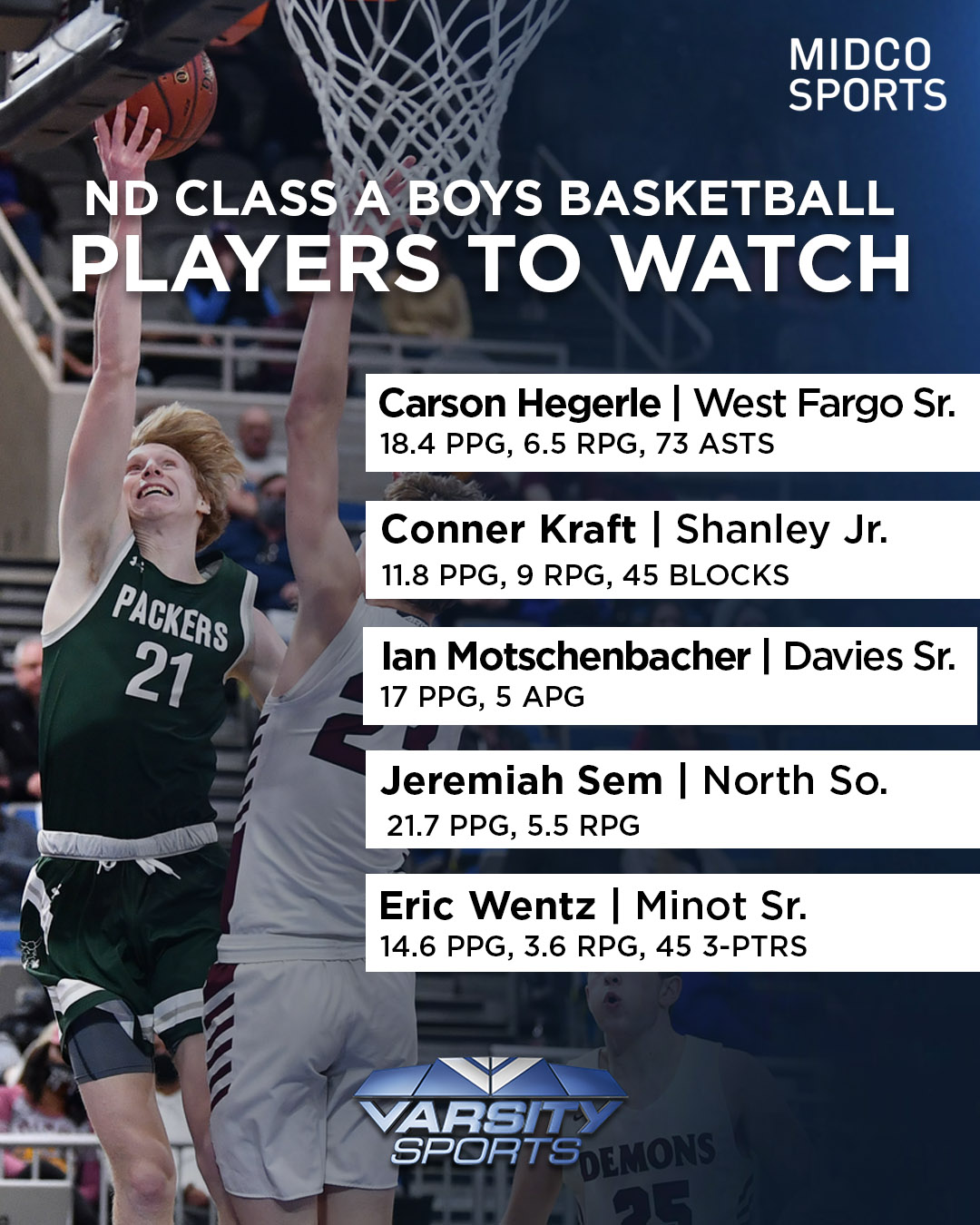