Will a change in leadership to a perennial power open the door for a new state champion or will Century continue its dominance in Class A girls basketball? That’s one of the many storylines to follow this season. West Fargo has a junior duo that’s hoping to guide the Packers to the promised land much like the boys team did a year ago. As you’ll read below, there’s no shortage of talent in girls basketball across the state and it should make for another competitive season in 2021-22. Check out my rankings and top 10 players to watch below.

The Patriots enter the 2021-22 season with a new head coach and only one returning starter, but I still believe they’re the team to beat in Class A. Nathan Welstad inherits a program that has been at the top of the mountain the last decade thanks to head coach Ron Metz who retired this past spring. In 14 seasons, Metz led the Patriots to six state championships and a ridiculous record of 310-50. Winning has been engrained in the minds of every Century player from the youth level on up. The Patriots have won the last three state championships, that’s not including the COVID cancellation year in which they lost in the state quarterfinal round. This year, they’ll be led by the reigning Gatorade Player of the Year in Logan Nissley. Nissley earned that prestigious accolade after a breakout sophomore campaign in which she averaged 21.4 ppg, 7.2 rpg, 3.8 apg, 3.6 spg and 1.8 bpg. Many coaches I’ve spoken with describe her as one of the best all-around talents in state history and keep in mind, she still has two years of varsity basketball left. She led the state in scoring last season and broke seven school records. Another key returner from last year will be Bergan Kinnebrew. The 5’11” junior guard (7.7 ppg, 3.1 rpg) has a polished game and can make defenses pay from any spot on the court. Look for seniors Halle Mattern, Abby Fletcher, Autumn Ketterling and Delani Clarke to step into bigger roles on varsity this season.

I was tempted to put the Packers in the top spot, but they still have some things to prove after a disappointing finish to the 2020-21 season. West Fargo finished 3-4 over their last seven games last year and failed to reach the state tournament. With that disappointment in the rear-view mirror, Dan Benson returns arguably the most talented lineup in the state. Juniors Miriley Simon (16.4 ppg, 9.9 rpg) and Chloe Pfau (15.4 ppg, 6.3 rpg, 3.6 apg, 3.6 spg) were unanimous all-EDC selections a year ago and are two of the most coveted recruits in the 2023 class along with Nissley. Simon holds division one offers from NDSU and Omaha and a handful of others from D-II programs. She’s a force around the rim and shot 57% from the field last season. Meanwhile, Pfau is a tenacious guard that’s already picked up offers from MSUM and UMary. In addition to her dynamic skillset, Pfau has proven to be a player that thrives in pressure situations. Coach Benson tells me he’d like to see his team become great on the defensive end which should lead to some great transition opportunities on offense where they can take advantage of their talent. His goal is to average 75+ points per game this winter. The Packers will also be counting on players like sophomore guard Brylie Peterson, junior Taylor Van Winkle and senior Jessica Walsvik to make big strides from last season.

Don’t forget about Davies. The Eagles finished with a 24-3 record last season capped off by an EDC tournament title and runner-up finish at the state tournament. The question for the Eagles will be how the team plans to move on after the departure of standout seniors Ryleigh Wacha (1st team all-state pick) and Taylor Fey (All-EDC). Head coach Tonah Safranski is hoping the Eagles’ philosophy of pressure defense and up-tempo offense help ease the burden of replacing that talented duo. All-EDC selection Ava Wild (9.3 ppg, 6.2 rpg) returns for her senior season and should be one of the top scorers and rebounders in the conference. Look for fellow seniors Taylor Safranski (5.4 ppg, 3.9 apg, 2.5 spg, 29 3-ptrs) and Marissa Burian (5.8 ppg, 35 3-ptrs) to join Wild as leaders on the team. Sophomores Ashton Safranski and Karley Franks earned playing time last year as freshmen and will be asked to do a lot more in their 2nd year of varsity hoops.

Three starters return for a Demons team that finished 16-8 last year and came up one win short of making state. BHS had very little trouble scoring last season, averaging 73.3 ppg which was good enough for third in the WDA. They attempted the most 3-pointers in the conference, but they also made the most and shot the deep ball at a solid clip of 33.6%. Look for them to continue to use their relentless pressure defense (led WDA with 16.4 spg) to make up for their lack of size. All-WDA performer Peyton Neumiller returns after a strong sophomore campaign in which she averaged 15 points per game. Twin sisters Payton and Sydney Gerving enter their 3rd season on varsity together. Payton is a well-rounded player that averaged nearly 10 points per game as a junior, while Sydney is described by her head coach as the “spark plug” for the team. Look for sophomore Paige Breuer (4.6 ppg, 18 3-ptrs) to join the ranks of the top scorers in the conference. In limited playing time last year, she proved to be a tremendous shooter. If Bismarck continues to shoot well from outside and gets a team effort on the boards, the sky is the limit.

The Sabers might be the wildcard in my top five. They graduated a talented class of seven seniors last year and, with it, a majority of their scoring production. There’s no doubt they’ll miss the likes of Jaiden Baker and Arianna Berryhill. The sense I get from coaches across the state though is that the Sabers have earned a ton of respect based off their consistent success since the program’s inception. Head coach Jim Petrik will lean heavily on his standout junior Alyssa Eckroth (11.9 ppg, 5.1 rpg) early on for scoring production. Eckroth, who holds an offer from U Mary, is a versatile player that can play any position on the floor. Leadership will be important, too, as the Sabers have just three seniors this season in Breena Sand, Hailyn Weigel and Alece Blazek. A couple of younger prospects that has Petrik excited are sophomore point guard Mia Berryhill and 6’3” freshman center Brooklyn Felchle. There might be some growing pains early but expect Legacy to be a state tournament contender down the stretch.

I’m interested to see what program surprises us this winter. As a result of huge roster turnover, I don’t have Red River or Devils Lake among my bubble teams. But I wouldn’t be at all surprised if one of those squads snagged a bid to the state tournament at the end of the year. I did include Minot as I feel the Magi might be a dark horse this year. The return nearly all their scoring from last year and also get back senior forward Mariah Evenson (12.2 ppg in 9 games) who was sidelined with some health issues during her junior season. Sophomore Avery Lunde (15.4 ppg, 7.2 rpg, 2.6 spg, 27 3-ptrs) and 8th grader Maggie Fricke (11.4 ppg, 4.5 rpg, 22 3-ptrs) are the top returners. Turnovers doomed the young Magi last season, but if they can take care of the basketball this season, they’ll be dangerous. Shanley finished 15-10 last season but made a run to the state semifinal round a season ago. The Deacons return two starters including 6’4” senior forward and Minot State commit Emily Srejma (7.9 ppg, 6.8 rpg). Hannah Hoedl and Desi DeKeyser are the other two seniors on the roster. The WDA’s leading rebounder from last season Annie Nabwe (12.8 ppg, 9.8 rpg) is back to lead Jamestown in her senior season. Nabwe will be one of the most exciting players to watch in the state. The WDA’s leader in assists (5.9 apg) last year, junior guard Ella Falk, also returns for the Blue Jays. Sheyenne has a new head coach in former Century assistant Kenyon Wingenbach. There’s plenty of optimism surrounding a Mustangs program that returns four starters from last year’s team including 6’2” junior Maya Metcalf (12.3 ppg, 7.6 rpg, 17 blks) and senior Alivia Manson (7.0 ppg, 48 3-ptrs). 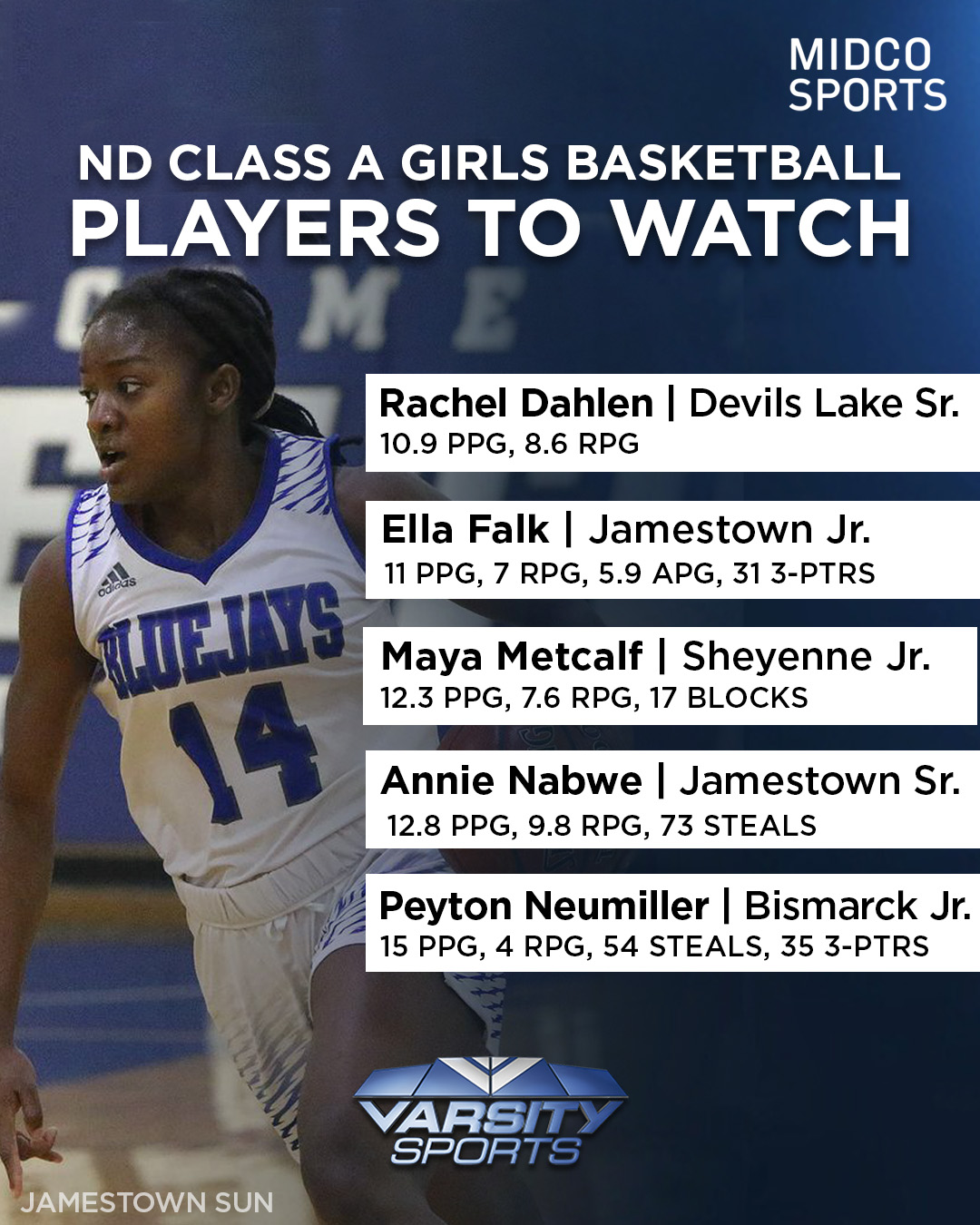 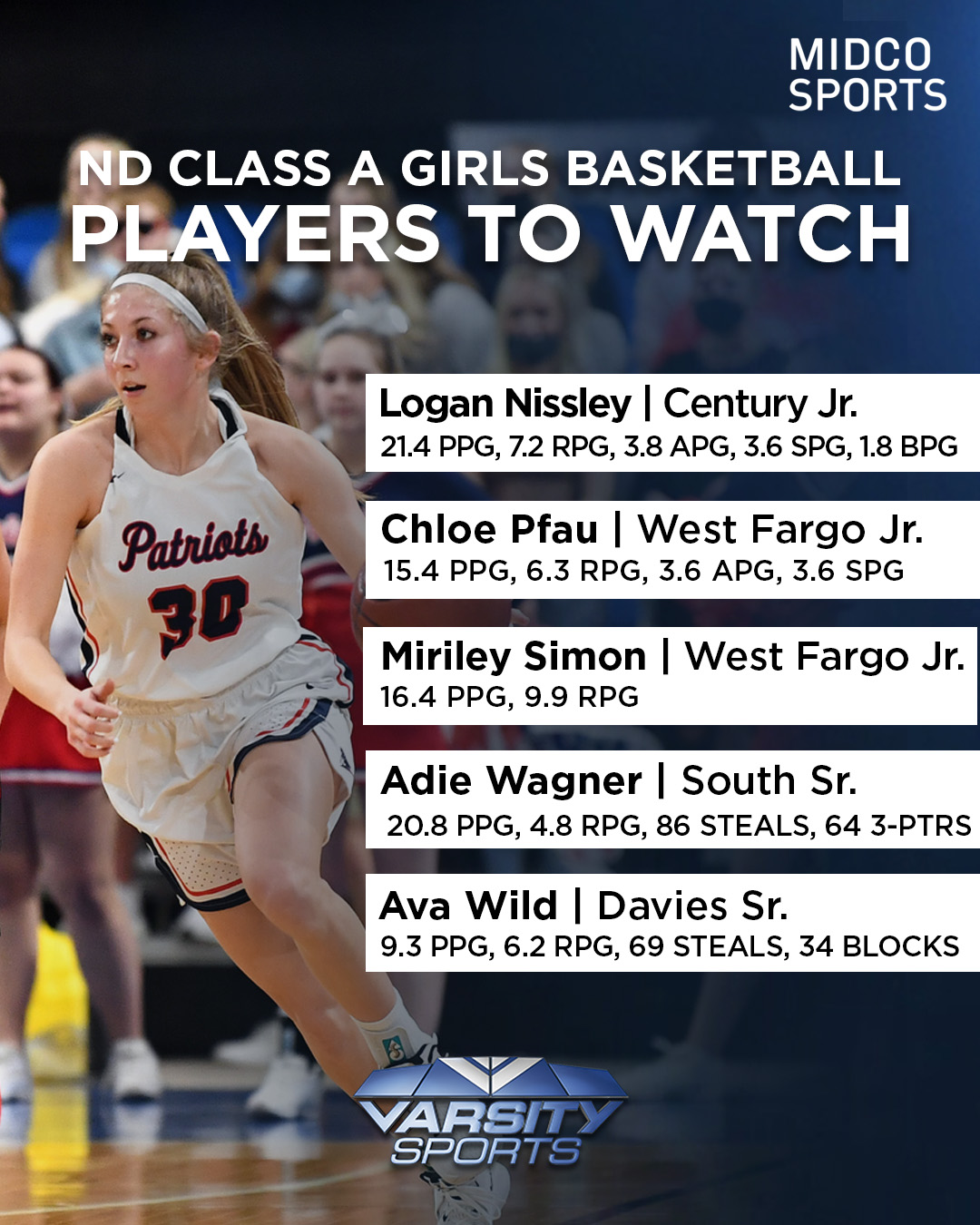