There will be two clear-cut favorites in Class B girls basketball this season and they just so happened to be located a mere 27.5 miles away and are huge region rivals. Central Cass and Kindred are loaded with talent and varsity experience, two invaluable assets in high school hoops. But, what about the rest of the contenders? The defending state champs from Grafton have a stable of players that’ll keep them in contention all year and the Lions from Linton-HMB are ready to pounce on teams this winter, too. The competition level should be high all year and I’m excited to see who ends up donning the Class B crown at the end of the season in Grand Forks.

Typically, when you ask coaches about their team in the preseason, you make a point to ask how they’ll make up for the loss of player x, y or z. There’s always roster turnover in high school sports. Consider the Squirrels an anomaly though. Jay Bachman returns his entire roster that features several players with 3+ years of varsity experience, including a couple of seniors that’ll be starting varsity for the fifth straight season. This crew has a ton of playoff experience, as well, including last year’s state runner-up finish to Grafton. About the only thing left for this group to check off the list is winning a state title, so that’s the type of pressure that this veteran team will be facing night in and night out. There’s also the fact that to even reach state they’ll need to go thru my preseason #2 Kindred which features a star-studded lineup. It’s really a pick your poison when it comes to defending Central Cass. Junior Decontee Smith (13 ppg, 8 rpg, 115 stls, 90 ast, 25 blks) led the team in scoring, rebounding, steals, assists and blocks last season. She’ll be a handful once again, along with seniors Rylie Holzer (7.1 ppg, 70 ast), Kailey McKinnon (9.1 ppg, 30 3-ptrs), Jaylin Cotton (8.2 pppg, 5 rpg) and Morgan Lee (7.5 ppg, 35 3-ptrs). Coach Bachman likes to play at a rapid pace, and he has the depth to do it. What they lack in size, they make up for with effort and toughness. They had seven players average three or more rebounds per game last season. This team will entertain fans all winter but will be a pain for the opposition.

I didn’t even have to leave region one to find the number two team in the state. Speaking of which, is there any chance we can convince the NDHSAA to add a wild-card team into the Class B girls basketball state tournament this year? It’s a shame that one of these teams won’t make the elite eight, but I do feel it brings some incredible energy to region championship night. Sam Brandt’s Vikings return perhaps the best athlete in the state in senior Abby Duchscherer (23.8 ppg, 13.4 rpg, 126 stls, 121 ast, 25 blks). The University of Alabama softball commit has been one of the top basketball players in the state ever since bursting onto the scene as a 7th grader and helping the Vikings finish a perfect 26-0 with a state title. Duchscherer and fellow seniors Terryn Johnson (18.7 ppg, 9.9 rpg, 58 stls, 28 blks) and Tina Freier (8.7 ppg, 5.8 rpg, 78 ast) not only won the state championship that season but took home the crown again as sophomores. But since then, the Vikings haven’t played a game at the state tournament despite overall records of 22-1 in 2019-20 and 19-4 last season. Look for junior Kacie Burner (14.5 ppg, 41 3-ptrs) to continue her sharpshooting ways. The leadership and talent are there for the Vikings, but the test for this team will come in the postseason when they try to exercise some demons and get past Central Cass to reach the elite eight.

Despite some key losses, the Spoilers check in at #3 on my preseason list. Carlee and Cassie Sieben have moved on after playing for their Mom and helping the team go 25-2 with a state title last season. Head coach Laurie Sieben still has plenty to smile about as she looks at her roster headlined by last year’s state tournament co-MVP Walker Demers (13 ppg, 8 rpg, 62 blks). The 6’3” junior and University of South Dakota commit will be a force in the paint on both ends of the court for Grafton. She’s been great with her back to the basket but has added different elements to her game as she matures at the varsity level. Senior Regan Hanson (6.8 ppg, 3.4 rpg, 83 ast) will be the quarterback of the offense, but she’ll also be expected to contribute more scoring punch to the lineup. Senior Cassie Erickson (5.3 ppg, 3.8 rpg) was a versatile player for the Spoilers a year ago and she helps solidify what is a very solid defensive unit. It might take some time for this team to gel, but their defense will win them a lot of games in the meantime.

Success has been plentiful for the nucleus on the Linton-HMB girls basketball team. Many of the players on roster just helped the Lions repeat as state volleyball champs and now they’re hoping to get some revenge on the basketball court after being upset by Carrington in the region final last season. How good was Linton-HMB last year? The Lions only two losses came courtesy of the two teams ranked at the top of my preseason rankings, Central Cass and Kindred. Head coach Tanner Purintun has to be excited about his four senior leaders returning in Teegan Scherr, JayCee Richter, Erin Kelsch and Callie Hase. Richter (15.1 ppg, 4.7 rpg, 55 stls, 76 ast) was recently named senior athlete of the year in volleyball and her athleticism is off the charts. She’ll be one of the top players in the state again this winter. Scherr (8.5 ppg, 2.5 rpg, 50 stls, 41 3-ptrs) is the other all-district player returning for Linton-HMB and has great shooting range to go with her defensive skills. The Lions are an undersized bunch which could make rebounding an issue, but I believe they have the talent to overcome that and win region three.

Kenmare has been making the most of an impressive run of female athletes. The volleyball team finished 27-3-1 and made the state tournament in the fall and now the Honkers girls basketball team is hoping to improve upon its success from last year in which they had an undefeated regular season for the 1st time in program history and finished 6th at the state tournament. This team is led by a pair of standout juniors in Brenna Stroklund (18.6 ppg, 8.5 rpg, 49 blks) and Kate Zimmer (13.6 ppg, 5.8 rpg, 76 stls, 137 ast, 48 3-ptrs). Both Stroklund and Zimmer will be among the top players in the state this winter and will have the Honkers at the top of the rankings all season. The Honkers title hopes will largely depend on the depth they’re able to build with some of the newcomers.

After missing out on the state tournament with a 15-8 record last year, the Skyhawks look poised for a strong season. A big reason being the addition of second team all-state pick Hailey Quam who transferred over from Wilton-Wing. Quam is both the top returning scorer and rebounder in Class B after averaging 27 pts and 15 rebounds as a sophomore for the Miners. She helped the Miners finish fourth at state last season. Quam will join a couple of talented seniors in the starting lineup in 6’0” forward Grace Kelly (11.7 ppg, 4.6 rpg, 53 stls) and 5’4” guard Kennady Walth (7.9 ppg, 68 stls, 78 ast). Head coach Dan Seifert has been excited about the competitiveness he’s seen from his team in practice and feels this team has a chance to do something special.

If there’s one team that I might have too far down on this list, it’s Four Winds-Minnewaukan. The Indians return their entire team from last year’s 15-8 squad that finished as the region 4 runner-up. Sean Gourd’s team will be led by a trio of senior standouts. Ezura Rainbow (16.1 ppg, 9.3 rpg, 76 blks) was the program’s first all-state player in more than a decade last year and she’ll be a force in the paint once again. Myona Dauphinais (16.7 ppg, 122 ast, 36 3-ptrs) and Mahpiya Jackson (16.9 ppg, 8.4 rpg, 48 stls) have evolved their games nicely and have their sights set on leading Four Winds-Minnewaukan to their first Class B girls basketball state tournament in school history.

The Tommies finished 20-3 last season with a runner-up finish to eventual state champion Grafton in the region championship. Jason Brend’s team will have to make up for some key graduated players including last year’s Miss Basketball finalist Mackenzie Hughes. The Tommies will lean on returning all-region pick Libby Koerber (8 ppg, 5 rpg, 35 stls) for leadership early on. Head coach Jason Brend says he likes his mix of quickness on the perimeter and length in the paint. He’s hopeful that combination will lead to a balanced scoring attack. You can almost always bank on the Tommies to be among the state’s best each year.

Coming off a 5th place finish at state last year, the Cardinals have a solid nucleus back to compete for the region four title again. All-region pick Morgan Freije (11.9 ppg, 3.2 rpg, 92 ast) is the headliner for Rob Scherr’s squad. She’s a player that knows how to attack the basket and dish it off when her teammates are open. Sophomore Jaya Henderson (10.4 ppg, 35 3-ptrs) will try to pick up right where she left off following a terrific freshman season. The team will have to deal with the loss of 6’0” sophomore Cora Badding (4.4 ppg, 2 rpg) who suffered a torn ACL during the volleyball season. The Cardinals full court pressure defense will help them pile up a lot of wins again this season.

Led by a pair of returning all-region selections, Beulah is ready to make a run at the state tournament. The Miners finished 14-8 last year but return a lot of varsity experience including three seniors that have been playing varsity since they were freshmen. 5’10” senior Kinsey Zuroff (17 ppg, 9 rpg, 29 stls) will be at the top of the scouting report for every Beulah opponent this winter. She had a dominant track and field season, was all-state in volleyball and will likely find her way onto an all-state list in hoops this winter. 6’0” junior Harys Beauchamp (16 ppg, 12 rpg, 38 blks, 30 3-ptrs) will be one to watch again this season after a strong sophomore campaign. 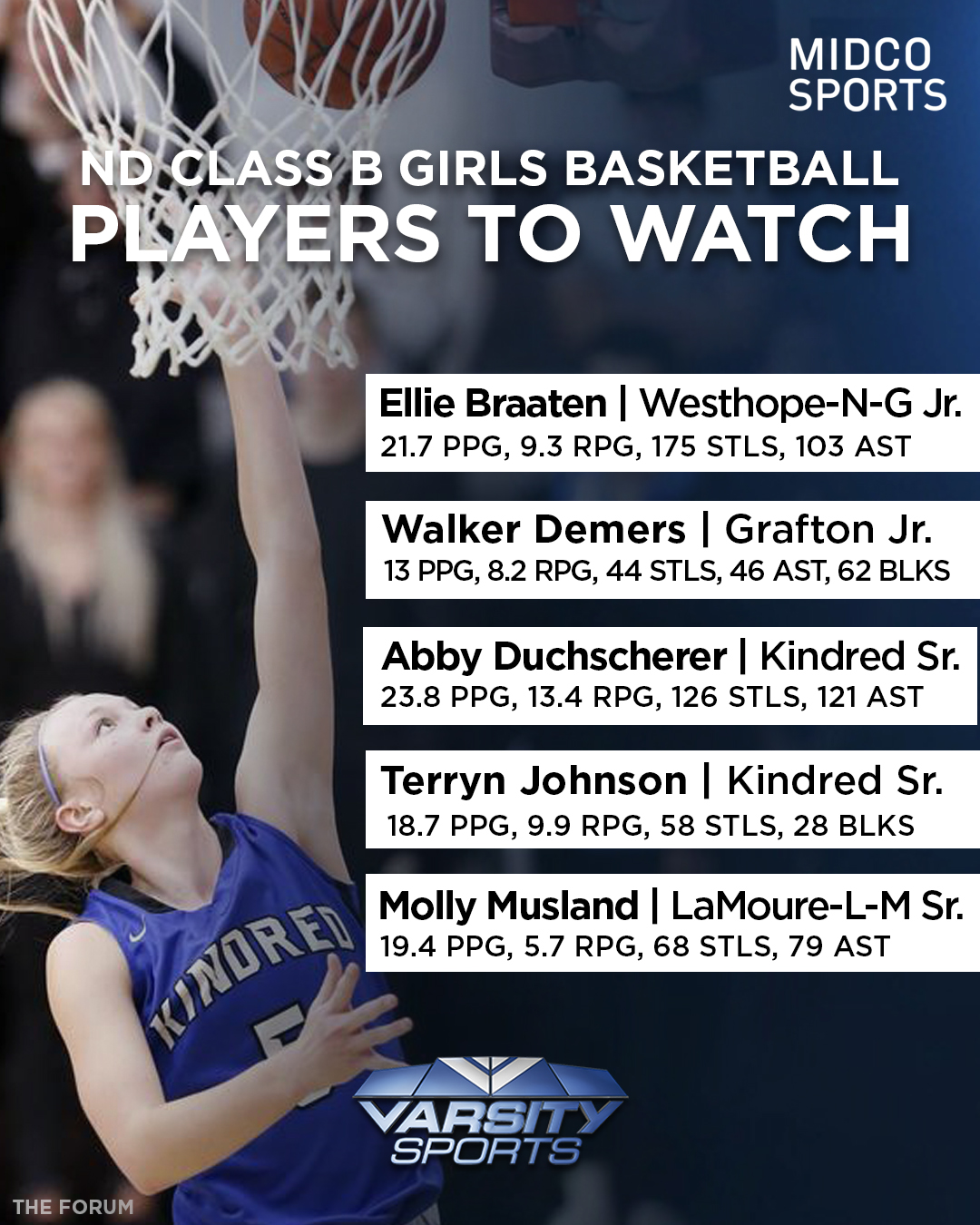 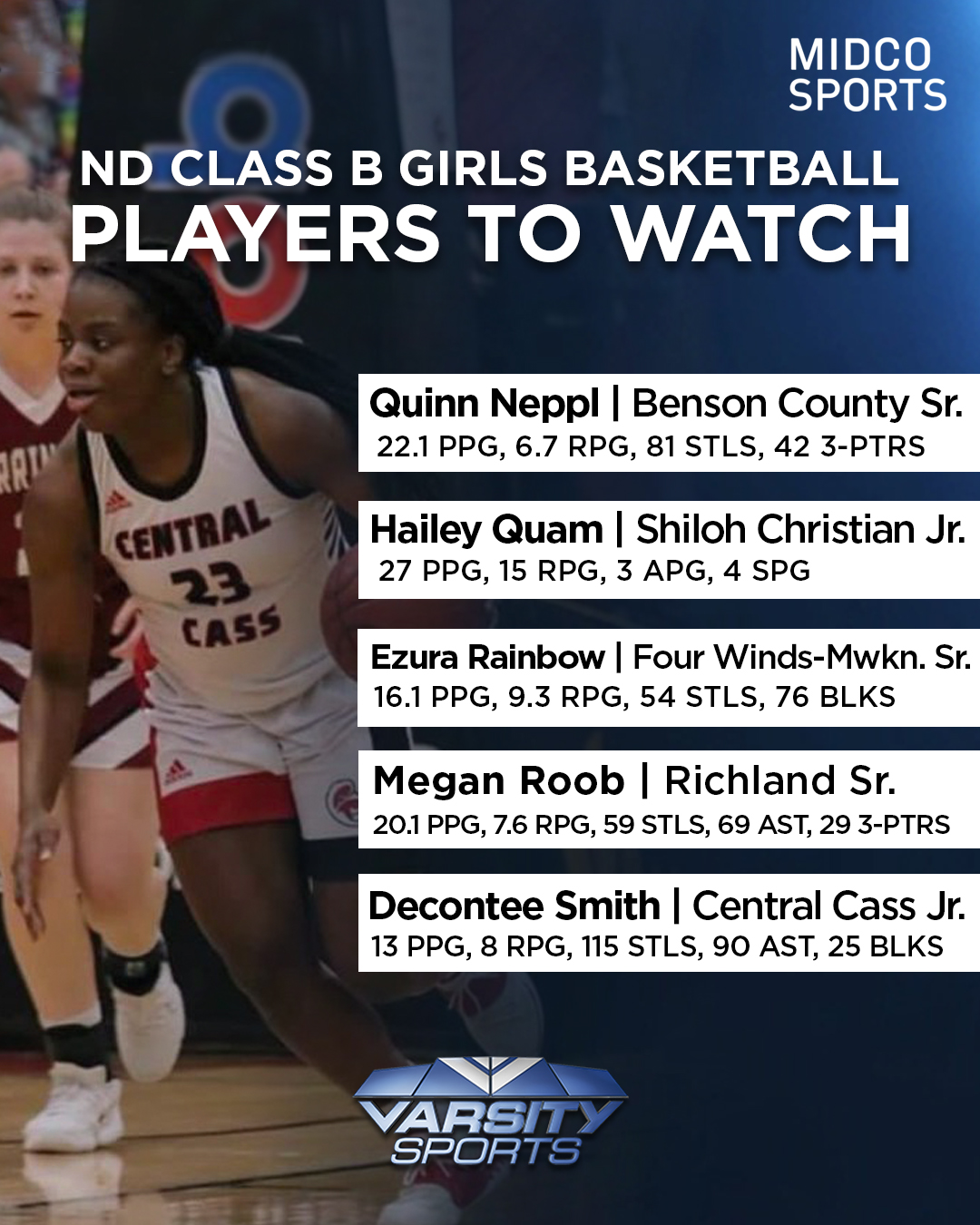