Behind the Scenes: Tourney HQ

For the men’s and women’s teams of the Summit League and the Northern Sun Intercollegiate Conference (NSIC), this is the moment. They’ve put in tireless hours perfecting their game plan and preparing for every scenario in the hopes of being the sole team at the center of the bracket.

And while they’re running drills and formulating plays, there’s another team getting ready for the Summit League and NSIC tournaments.

The tournament matchups aren’t even set yet, but at Midco Sports, a flurry of work began months ago in preparation for two weeks of back-to-back games.

Bringing each game to your TV on time takes an entire team you never get to see. Each player has a vital role in the process. From camera operators and replay specialists to producers and engineers, airing a high-quality broadcast on Midco Sports takes skillful collaboration.

“Our February and March tournaments are the epitome of a team effort,” explained Craig DeWit, Midco Sports General Manager. “Most of our regular season broadcasts take between 12 and 18 staff members, and for the tournaments, we have 30+ people working.”

One of these positions is the technical director. Anytime the shot changes, a graphic pops up on the screen or a replay rolls, there’s a chance that Toby McDonald is the one making it happen.

Toby does his job facing a wall full of monitors with a switchboard covered in neon buttons at his fingertips as several voices create a steady buzz over his headset. And while most people would find this an overstimulating work environment, this is Toby’s zone. 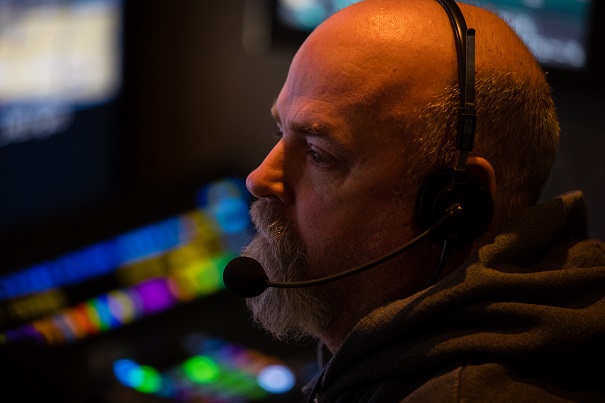 Toby McDonald in the middle of a live game.

He runs the board with a skill that – after a few decades in the business – has become second nature to him.

“I used to direct newscasts where everything is scripted. Sports isn’t that way,” said Toby. “While going to break with a highlight, I may have to decide to throw in a graphic at the last five seconds, so the video doesn’t freeze on air. I have just a few seconds to decide that.”

While his role during the games themselves is essential to a seamless broadcast, much of the work he does before the cameras turn on is just as important.

“Setting up the switcher for the tournament takes a full day to build the sponsor elements and team elements,” explained Toby. “It takes another couple of hours after the second full day of the tournament to update it for the teams that have advanced.”

Toby prepares for this long stretch of incredible basketball as much as he can, but there’s always that element of unpredictability that comes with a live game.

“In live sports, things change in an instant,” explained Toby. “The tournaments are so emotional, and the atmosphere is so big. When SDSU is playing USD and there is just a sea of red and blue, being a part of that is cool.”

It’s that big atmosphere that Toby and the rest of the Midco Sports team are dedicated to capturing and sending back to all the viewers at home.

The enjoyment of making live TV has trickled down Toby’s family tree. Throughout the tournaments, his son, Avery, and daughter, Jacie, are often right next to him in the production booth, running replays or doing stats.

“It’s a lot of fun. It’s a neat atmosphere,” laughed Toby. “Not a lot of families get to work on a broadcast together. My son posted on Facebook the other day saying that some fathers and sons play golf. We do TV.” 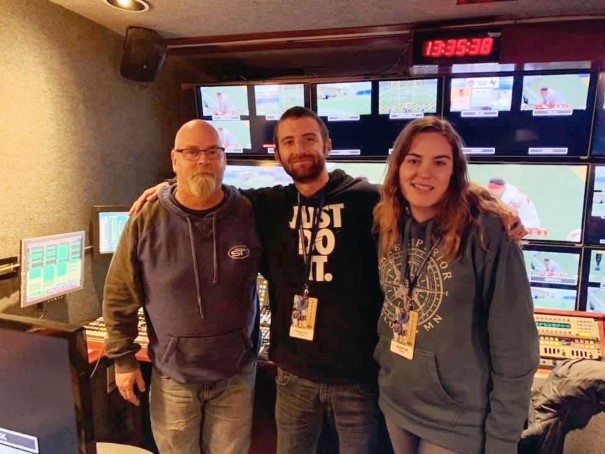 Midco Technical Director Toby McDonald with his son, Avery, and daughter, Jacie, before a live game.

The cameras are rolling, the director is calling the shots, but there’s another step happening behind the scenes before you can watch the game.

Tucked away in the Midco Sports studio in Sioux Falls, South Dakota, is a small room labeled Master Control. No matter where a game takes place, it goes through here and is usually under the watchful eye of Quentin Coulter.

“We are the last stop before anyone sees it,” said Quentin, a Master Control Room Operator for Midco Sports. “They’re putting it all together, and I’m putting it out there.” 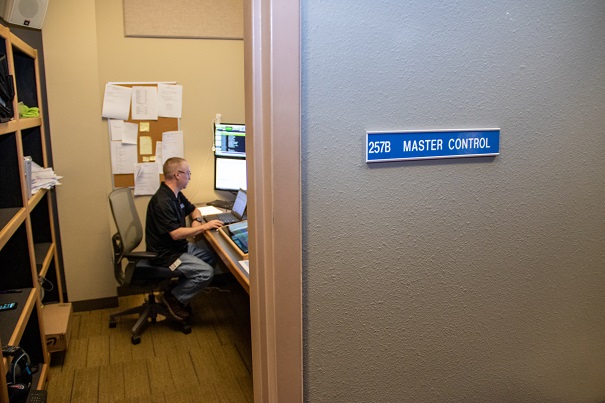 This job is all about timing, from when to roll the commercials to the minutes before the next game starts. As the game clock winds down during tournament time, Quentin’s mind does some mental math gymnastics.

“I can guarantee you that the game isn’t going to end right at 7:30,” explained Quentin. “It might be 7:38. It might be 7:21. No idea. But the master control operator is the one that decides what to do next to keep the program going. It’s not a black or white situation. Every game is different. But for me, it’s fairly simple now, somewhat because of the system I have in place but also because of my experience. There are very few things that are going to come my way that I haven’t seen before.”

Quentin really has seen it all. He also has the opportunity to see the games from different angles. He spends time throughout the season directing and technical directing games for Midco Sports. All of this expertise across the board means viewers at home get to seamlessly experience all those can’t-miss tournament moments.

“The tournaments are always exciting. There are always great games,” said Quentin. “In master control, it’s like you’re the offensive lineman in football. It’s a very important position, but people really only take notice of you when you make a mistake. So, if you’re doing your job right, no one is going to know about you. So, in that sense, I’m perfectly happy not being noticed.”

It’s a couple of long days that turn into long nights, but Quentin and the entire Midco Sports team are always up and ready for the challenge.

“Every year during the tournaments, across that stretch of 10 days, I’ll spend about 110 hours working,” said Quentin. “And the only way you can do that is if you enjoy it.” 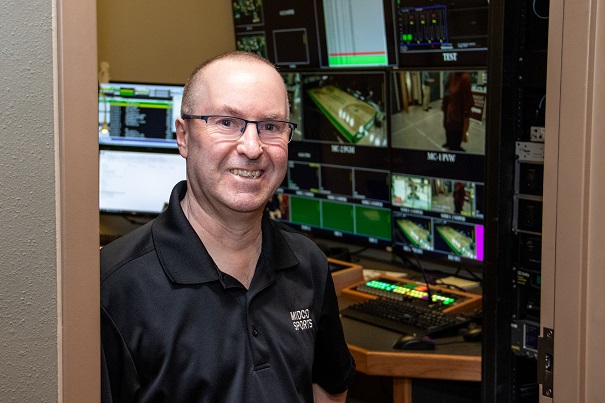 Watch the NSIC and Summit League tournaments February 28 – March 8 live on Midco Sports. Check out complete coverage before, during and after every game on MidcoSports.com/TourneyHQ.