The last three seasons it’s been Bridgewater-Emery/Ethan and Winner in the 11B championship game. These two programs have been strong for a long time. They once again lead the way however I think the competition gets even tougher with several contenders moving towards the top.

Since Trent Olson took over as head coach of Winner, the Warriors are 19-0. They are a proud program that is on one of their best streaks in school history. They return some size and speed and have some big underclassmen ready to fill in the holes. “We not only have to replace 16 seniors on the field but their leadership also,” said Coach Olson. “We will go as far as our seniors take us. We must play solid defense, run the football effectively.” They will rely on Riley Orel their all-state running back along with junior sensation, Aiden Barfuss to run the ball behind their traditionally dominant line.

You don’t need to look at the roster to know what you’re going to get with this team. Head Coach Jeff Van Leur has spent almost 40 years building a perennial winner. They fought through the 11B bracket as the 7 seed but knocked off Hot Springs, Sioux Valley and Beresford on their way back to the dome. This season Riley Endres will be featured in the running game and Sutton Arend is back as one of the top defensive players in the class. They make start out the year similar to last season but they will be a contender at the end once again.

The Huskies set records for points scored in a season last year and they have a legitimate shot to top that mark this season. Coach Jake Terry notes that even though they return most of their starters they’ll need more leadership to make a run at cracking to the next level, “We will go as far as our

leaders will take us. As with any team we need to take care of the ball and win the turnover

battle. Last year we finished +11 on the season and we would like to improve on that.” Ben Swatek and Lucas Heiser have a chance to be one of the biggest impact backfields in the class.

Roncalli made huge strides last season with 7 wins after winning just six games the two years before that. Head Coach Billy Young has a lot of solid players and the Cavs are ready to take the next step and be contenders in the class. Jackson Isakson was an all-state kicker and returns at quarterback. He threw for 922 yards and ran for 354 more. Look for Maddox May and Abe Kretchman to both rotate in the backfield. Last season they combined for 114 yards per game. Roncalli’s defense could be the strength of this season’s team. They used several underclassmen starters last year and gave up two scores or less in all but two games.

A disappointing but constructive season left St. Thomas out of the quarterfinals last season. They regroup with a ton of young athletes who are ready to get the Cavaliers back into contention. They’ll rely on Matt Larson at running back who is ready to take on a bigger role as a leader this year. Lee Neugebauer goes into his second year at quarterback ready to throw the ball in Coach Wayne Sullivan’s spread offense. Easton Ogles moves from Stevens to St. Thomas More as potentially one of the top playmakers in the class. There are several sophomores and even freshman who are looking to make an impact on the varsity roster for this under the radar team.

The Mustangs went 5-5 last year, this year Dan Snethen continues as the Head Coach in his second year. Eli McFarland, Logan Ellison, Lawson Loiseau and Carter Sorenson return in the backfield and the defense will be big up front.

The Pheasants have a chance to take a step up as one of the top teams in 11B. They have 7 starters back on offense and 8 on defense. Nolan Gall and Keaton Rohlfs are impact players but the depth and strength of the rest of their experienced roster will be why they will succeed. Coach Masen Oltmanns likes this group, “We plan on having an explosive team with a solid group of seniors, with a lot of varsity experience. We came off of a year with very few injuries and hope to be the same this fall.”

MCM returns all-state receiver Will Cleveland and some big guys up front like Jake Vanhout. But they will need to work in some youth at key positions. Those younger players could be very successful but it might take some time with inconsistent play.

MVP came into the playoffs with a lot of hope last year but were upset in the first round. They’ll look to a strong senior class including Reed Rus, to right that ship.

The Cossacks had one of their best teams last season but an early exit in the playoffs stung them. This season they will regroup with three offensive starters and three defensive starters back. “We should be pretty tough by the end of the year,” said Coach Dan Hughes. “But we need to stay healthy.” Their top line players can matchup with the best in the class, they will need more depth to rise to the top. Jace Christensen is expected to take over at quarterback with Boden Schiller as the featured back and , Aidan Brower, Lane Liebsch, Hudsyn Ruesink, Austin Siegal and Donovan Rose ready to step up as leaders.

Deuel should be back on track this year with 17 seniors and seven starters back on offense and nine on defense. Owen Quail had a solid junior effort at running back and is primed for a big season this year. Trey Maaland started as a sophomore last year and should be ready to step up this year. This is an experienced and motivated group. Coach Dustin Hourigan likes this team’s makeup, “There are 17 seniors on the roster who have proven to not only be goal driven but have also shown great leadership in the weight room and on the practice field.” Look for a more balanced attack offensively from Deuel this year as well as a much-improved defense.

The Tigers showed a lot of potential last year with a 7-2 record but lost a tough one in the playoffs to Wagner. They bring back 6 starters to try to avenge last season’s disappointment. They are solid up front with four linemen returning and will look to Andrew Marzahn to tote the rock. Lane Tietz is ready to assume responsibility for quarterbacking this team. “We lost most of our skilled positions but return 4 starters on the offensive line,” said Coach Shaun Wanner. “We have some good young skilled kids that will get better as the season goes on. We should be able to run and pass the ball, which will be beneficial.”

Don’t sleep on Hot Springs this year. They went 7-2 last season and return 8 starters on both sides of the ball. They are especially tough up front and Camron Maciejewski and Landon Iverson get to run behind that experienced line. “We return a lot of experience across the board,” Head Coach Ben Kramer said. “This group has worked extremely hard this offseason and it will be fun to watch that effort pay off this Fall.”

David Severson takes over as the head coach at Clark/Willow Lake. He’ll have five returning starters and some key newcomers to try to build on last season’s 4-5 record. Senior quarterback Trey Huber goes in to his third year as a starter and has some great skill players around him like, Mitchell Larson, Cole Brendan, Turnver Fjelland and Cole Heiman. Coach Severson likes the team, “I really love our athleticism and our dedication. We return a lot of our playmakers from last year.”

The Golddiggers went 5-3 in 2021 and should have some momentum with six starters back this season. This is a multi-dimensional team with good balance on offense. Ryan Rantapaa is a bruising back and Sam Kooima could be one of the top players in the class at either quarterback or running back. “We have a lot of really good kids who are hungry for success,” said Coach Kyle Kooima. “We have some spots to fill but we have a lot of kids ready to step up.”

The Rustlers return a good group of seniors and Head Coach Travis Heasley is excited, “We have a new system and the kids have picked up on it well. We have a senior class that is hungry and ready to dive in to the season.” Tate Hoffman will be featured in the new offense that will spread the ball around. Trey Knox gets to take the roll of distributing the ball. Coach Heasley spent six years in Pierre as an assistant and hopes to bring a lot of stuff from there to Miller this year.

The Comets continue to build into a football power. Head Coach Matt McIntosh takes over the program this year, “There is a great group of seniors that are committed to the team. They are showing up and

putting in the work during the offseason. There are also several underclassmen that we

will rely on during this season and they are ready to help.” Sam Fischer is a versatile leader who will take snaps and can also line up at receiver or running back. He along with other strong seniors should take the team in a positive direction.

The Pheasants could be one of those sneaky good teams in the class. They return a solid group of seniors including 8 offensive starters and 9 on defense. Charlie Patten and Jack Even will share carries in the backfield with Logan Bridges at quarterback. Head Coach Scott Hybertson likes the attitude this year, “We have a lot of returning players this year.  We do lose some very great leaders, but we also have some kids that truly love the game.  Last year was not a stellar year record-wise, but our guys played with passion.  Having that attitude is key to getting better.”

Josh Edlund takes over as head coach in Flandreau with 13 returning letterman including six starters. They will look to Ethan Hoffman for a big year producing yards behind an experienced line. “We have a solid group of returning skill positions and lineman this year,” said Coach Edlund. “Our off-season work thus far has been consistent and focused. Our senior leadership will be huge this year.”

Top Players to watch in 11B 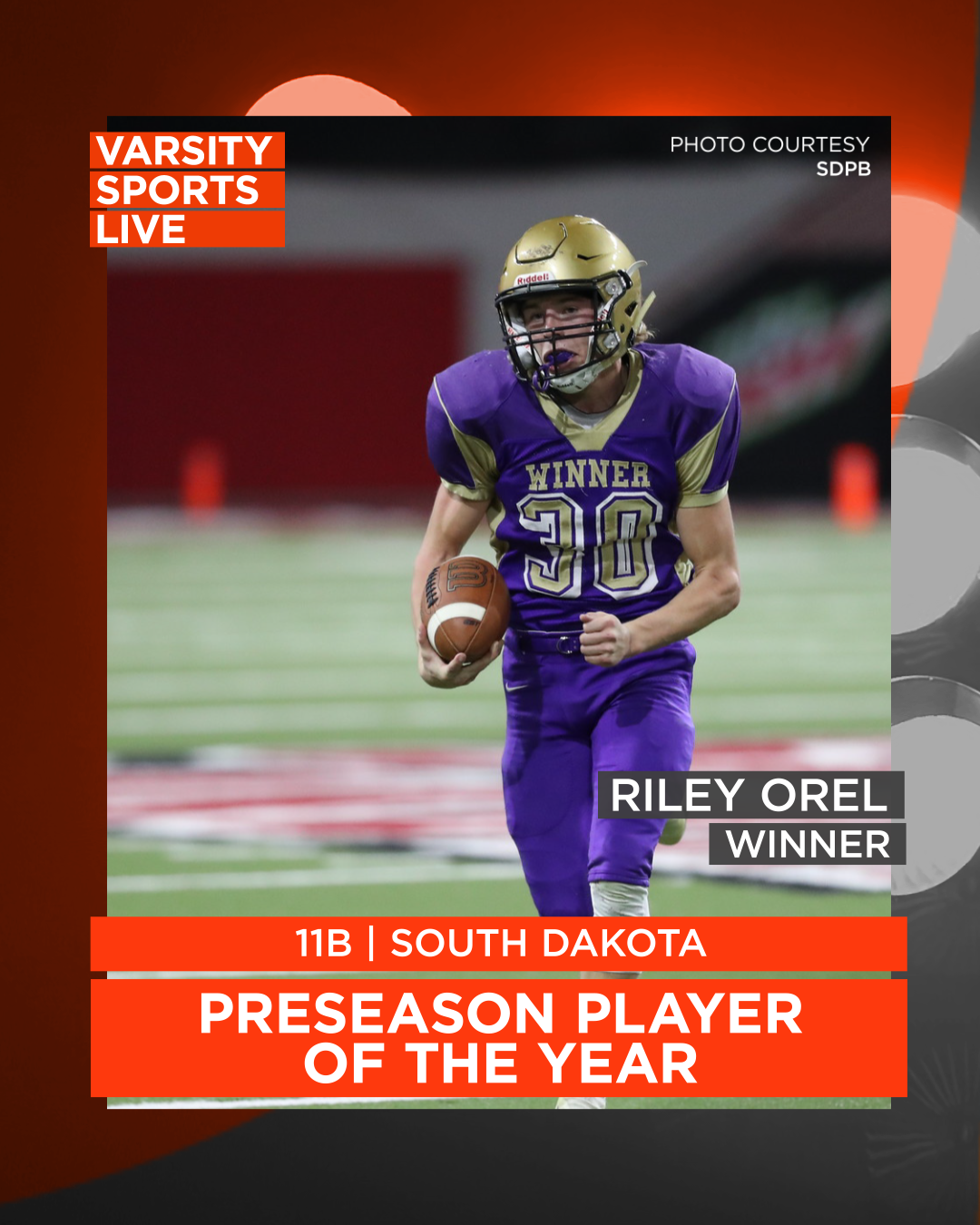