If you go out to a spring baseball game, try to check out one of these top of the line pitchers. There is some great talent in this state, and here's a snapshot of the best pitchers that South Dakota High School baseball has to offer. Thanks to all of people who helped with their eyewitness opinions on this list.

Tyler leads a young pitching staff in a big way. The high school quarterback is also one of the best pitchers in the state. Last year he came on the scene as a sophomore and showed he can pitch at the varsity level. This year he’s moved into the elite category, he has thrown 9 innings, given up just a single hit while striking out 19 so far.

Rice has one of the best strikeout to walk ratios on this list. He threw 48 strikeouts in 25.2 innings last year while only walking 13. He earned first team All-State recognition for his dominant season. So far he’s at it again this year. Through 11 innings pitched he has yet to give up an earned run and has 17 strikeouts and just two walks. Rice’s control sets him apart from most high school pitchers.

Not many can get as many swinging bats as Eddie. He struck out over 2 batters per inning as a junior last year (21 IP, 50 K). “Eddie Price will be our best pitcher,” said Coach Danny Miller. He can be unhittable and has good velocity with movement.” Eddie probably could have played college baseball, but chose to play football at Northern State.

The junior has become an ace after putting up an impressive start to the season with 12 2/3 innings, 19 strikeouts and a 1.10 ERA. Thompson recently topped out at 88 MPH in his pitching showcase.

“We expect Ganin to continue to be a leader of our team both on the mound and offensively,” said Coach Chad Barman. “He was dominant against Harrisburg, throwing a complete game shutout while only allowing two hits.”

Thompson pitched as a sophomore last year and put up a 1.09 ERA with 42 Ks.

The All-State pitcher is an artist. His coach Drew Lawrence loves to see his senior on the mound,

“Kieren is consistently around the zone. He is able to throw his 4 seam fastball, 2 seam fastball, curveball and changeup for strikes and at any point in the count which keeps hitters off balance.”

Last year Luellman didn’t rely on the K as much as most aces, but it’s really hard to make good contact off of the Yankton hurler. He struck out 33 in 37 innings, and recorded a 1.07 ERA in the process. This season he threw a five inning one-hitter with 6 strikeouts against Mitchell. Kieren is headed to Dakota Wesleyan to pitch next year.

Not many pitchers keep the ball in the strike zone as often as Preston Riddle. Preston can get several pitches over for strikes and changes speeds and hits spots. “Another great pitcher for our staff over the last three years,” said Head Coach Jordon Johnson. Riddle has been a workhorse for the Patriots, last year threw 34 innings in the spring and this year again leads the staff in innings and has given up just one earned run. So far this year he has a 0.46 ERA with a WHIP below one and 17 strikeouts in 15 innings.

Bon Homme/Scotland has a long tradition of wheeling out aces onto the mound. Christian Uecker keeps that tradition alive and well. Christian helped his team all the way to a title as a junior last year. He put up stellar numbers (0.72 ERA, 0.776 WHIP, 65 K, 38.2 IP) and can hit the mid-80s. Coming into this spring had a 11-0 career record with a 0.81 ERA.

This season Uecker has pitched just three innings but recorded 8 strikeouts in that time.

Mason is a smart pitcher and uses that intelligence to pitch late into games. He throws a strong fastball in the mid-80s and locates it well.

“His understanding of the game and how to keep hitters off balance is one of the best I've seen in High School Baseball,” said his coach Dan Hughes. “Also he is a great senior leader on the mound. You can trust putting him into any situation and be able to get you outs.”

The lefty put together a dominant junior season with a 3-0 record and a 1.97 ERA. This year his first outing was against one of the best teams in the nation from Las Vegas and struggled to get the best of them. In his next appearance went 5 innings and didn’t allow an earned run against Mitchell. Then Tuesday shut down Yankton with a 6 inning 13 strikeout performance while not giving up a single run.

He’s been an ace for the Orioles for his entire high school career. Last year as a junior Brock put up a phenomenal season earning him all-state honors with a 7-0 record with 0.31 ERA and a .75 WHIP with 77 strikeouts in 44 innings pitched. 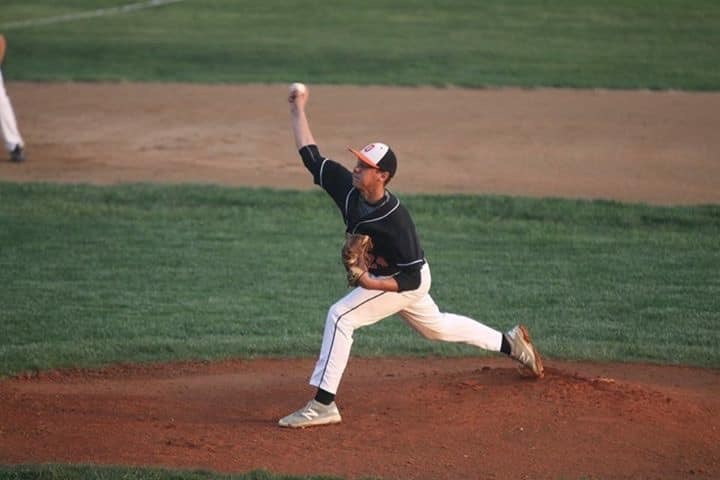 So far this spring Anderson has pitched just once due to a high ankle sprain, but threw 5 innings of shutout baseball giving up just a single hit with six strikeouts. No other pitcher in Class B is as in control as Brock Anderson. He has received multiple college offers for football, baseball and track but has decided to focus on an academic degree. His head coach Drew Sweeter has nothing but high praise for the senior, ” Brock is a bright kid and has a bright future ahead of him. Brock has been a great leader for our team. He always leads by example on and off the field. Being a 4 sport standout he’s always in love with competition.”

“I’m a big fan of Noah Syndergaard,” said Dylan Kirkeby. It may not be a coincidence that his hair and his delivery mirror the big New York Met pitcher. Dylan won’t intimidate you with Syndergaard-size but once those golden locks get up on the mound his array of pitches and command will set you down.

“Dylan has been a reliable arm for us since his freshman year,” said Head Coach Jeremy Van Heel. “He has continued to grow and develop his pitches, which has made him a weapon for Brandon Valley in big games.”

Last season Kirkeby struck out 1.4 batters per inning pitched and helped his team to a championship. He’s been doing his thing on the varsity level since he was a freshman in 2016. This season he’s made four appearances and has been even more dominant. He has 42 strikeouts in 22.1 innings pitched. He even threw a four strikeout inning against O’Gorman earlier this year.

Dylan signed his letter of intent to pitch at Northwestern College next year, the Red Raiders are getting a good one. He says his philosophy is simple, “The big thing my big brother always preaches is you can’t walk guys. You have to stay in the zone and make the hitter hit it or you get a strikeout I guess,” said Kirkeby. 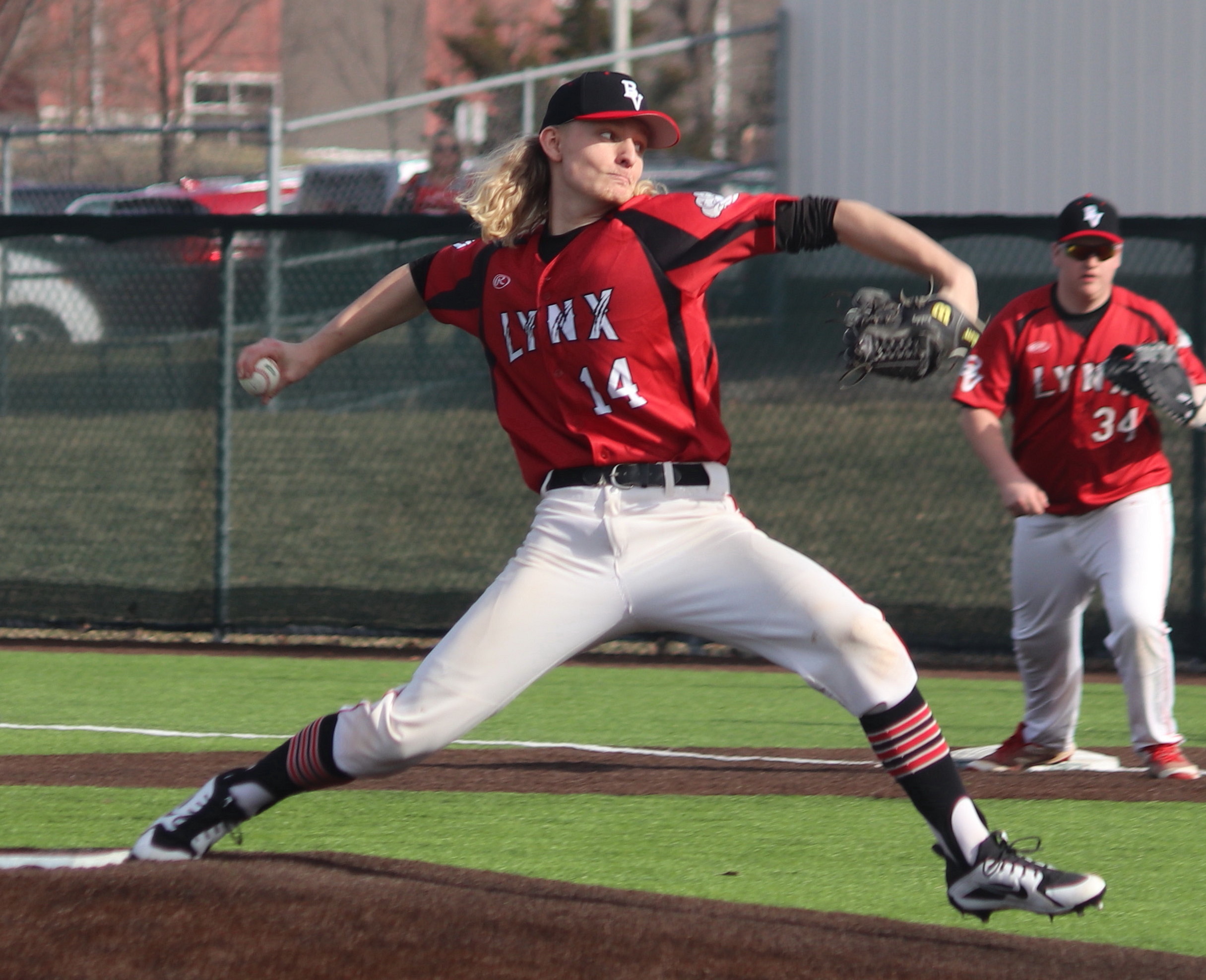 Best of the Rest

Ten spots are never enough to talk about all the aces across the state. Any one of these guys could step up and put a quality start on the board for their team. Here are the best of the rest:

Reece had a big year last season with a 0.70 ERA. He throws upper 70s and hits his spots. This year Reece has continued to improve. He has logged 15 innings with a 1.75 ERA and 22 strikeouts. Both of his early performances on the mound came against non-league teams in Las Vegas. Tuesday he pitched against Yankton in league play and threw a shutout with 10Ks with no walks. He gets ahead in the count often by attacking hitters and subsequently gives his team quality starts almost every time out.

Brecht throws a variety of pitches for strikes, although mostly a fastball, curveball guy, he can sweep a big knucklecurve across the plate too. “Nate is a big time pitcher when he is healthy,” head coach Jordon Johnson said. So far he’s looked healthy with 12 strikeouts in 5 and 1/3 innings pitched this spring with no earned runs allowed.

Nathan Doering has gotten the attention from the teams he’s faced. Several opposing coaches named Doering as one of the best in the state. Nate thew a 56 pitch no-hitter on April 5th this season, in all he’s gone nine innings and has yet to give up an earned run this year.

Elliot leads all of class B in strikeouts so far this season and he already has a no-hitter under his belt too. Not a bad way to begin the year.

Jackson is a standout in every sport he competes in. The All-State pitcher put up an unbelievable 0.47 ERA last year with a 0.71 WHIP. Kinzer is the ace of the Winner/Colome staff again this year. So far he’s made just one start but got the win with six strikeouts.

The staff for the Trojans has a lot of talent, but no one has more electric stuff than Cooper Maras. He started their only game of the year and struck out four in two innings as part of a team no-hitter.

Jared Miller showed what he is capable of with a six inning shutout over Yankton. He seems well suited to his role as a big-time pitcher. Miller had a 3.78 ERA with 21 K’s last year but this year could take that big step up as one of the top throwers in the state.

Tanner is a big right hander who can throw heat and mix in some great off-speed pitches. Last season Olmstead had a 2.10 ERA and struck out 1.4 per inning. This year he will be one of the aces for this Warrior pitching staff.

Bennett was at his best in the state tournament last year when he tossed a shutout. He ended the season with a 4-0 record and a 2.57 ERA, in 32.2 innings pitched. Osborn has one of the best curve balls in the state and can throw the fast ball and change too. He will play at Century Junior College in White Bear Lake in MN next season. In his lone start so far this year he threw a complete game victory giving up just one run.

Thelen has gotten off to a great start this year. He’s struck out 20 batters in ten innings of work. His WHIP is below one and he’s given up just one earned run.

Carter is the leader of the Stevens squad. He earned All-State honors as a junior last year and now leads a deeper and improved pitching staff for the Raiders. His most recent outing was three innings of shutout ball with three K’s. He is averaging more than a strikeout per inning so far this spring.

The big lefty can throw the heat with the best of them. Grey Zabel has been the best pitcher to this point for the Govs. So far he’s thrown just one game but was dominant in that appearance getting 10 K’s in five innings.