My career has taken me to some amazing places.

Allen Fieldhouse at the University of Kansas has been my most historic stop to date, but most my list is made up of college football venues. For my money, Montana’s Washington-Grizzly Stadium provides the greatest atmosphere in all of FCS football. Autzen Stadium at the University of Oregon features some of the most impressive amenities and is also one of the loudest, while the student section at Kansas State’s Bill Snyder Family Stadium is one of the best I’ve seen in person (See: Wabash Canonball.)

All those places have additional qualities that made them even more memorable to me, but none made the kind of impression the University of Oklahoma did this past weekend. If that’s how it feels to me, I can only imagine the impact that experience had on the South Dakota football team. 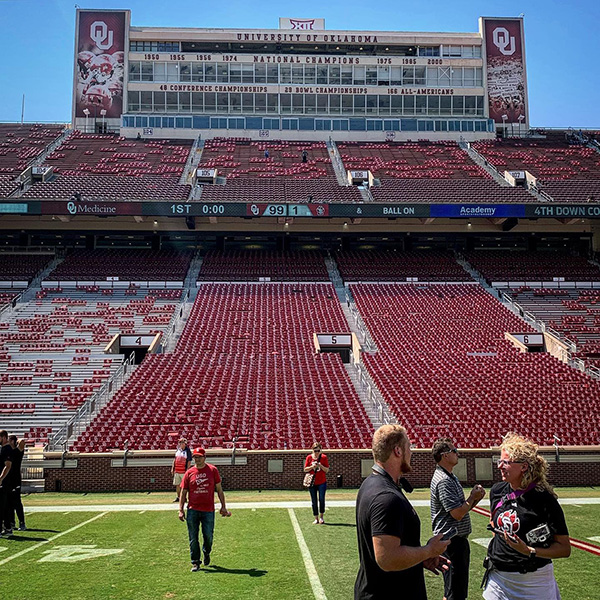 It would be tough to find a college football fan that doesn’t understand the mystique of Sooner football. Oklahoma’s seven national championships rank ninth all-time, and it is the only FBS program with four 100-win coaches.

In other words, they’re a benchmark.

That history was evident from the second South Dakota first arrived at Gaylord Family Oklahoma Memorial Stadium last Friday – mostly because a lot of it was prominently plastered on the outside of the press box.

It was with that first glance that the true reality of it all first sunk in for me. This was unlike anything the Coyotes – players, coaches, fans and media – had ever experienced. Oregon, which featured an eventual Heisman Trophy-winning quarterback was close, but the Ducks are still more known for their uniforms than they are for championships. Oklahoma, on the other hand, is one of the true blue-bloods of college football.

Adding to the uniqueness was the fact that this was also an opportunity that was rarely afforded to lower-level teams. The Coyotes, after all, were just the fifth FCS (formerly I-AA) opponent that the Sooners had scheduled since 1999.

Most of the risk for games like this is assumed by the bigger school. A loss to any sub-FBS program is not only a “black eye” for the program, but it’s even more costly when you consider that they are paying for someone to come and lose at their place.

In this case, South Dakota received $575K to play the No. 4 team in the country. The odds of a Coyote victory had likely never been lower, which is something plenty of people were happy to point out to me on social media. One gentleman told me that South Dakota was in for a “physical and mental beatdown” and that there is “no room for these kind of games in college football.”

I didn’t agree with any part of that opinion when I first read it, but my thoughts got even stronger as I observed what Coyote players were saying about the game. I caught up with a couple of them at the team hotel to see if they’d expand on why it was such big deal to them.

“Being on the field with a great team, a top team in college football, that’s what I dreamed about,” junior safety E.J. Reed said. “I dreamed of playing in those type of games. The fans, the atmosphere is what I really look forward to.”

Senior wide receiver Dakarai Allen echoed his teammate’s excitement. “Playing in front of everybody like that, that’s just a big stage. That’s the best place to showcase your talent and your team’s talent,” Allen said. “That’s the best opportunity, right now, for us.”

It seemed very clear that the players knew exactly what they were up against. They understood the potential risks for them and were willing to accept it in order to enjoy an experience of a lifetime. 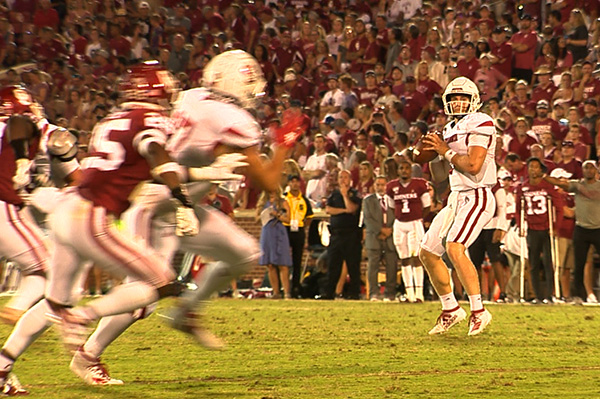 In the end, the game itself played out a lot like most of us probably expected. Oklahoma showed why they are considered a National Championship contender in a 70-14 rout.

But if you look deeper than the scoreboard – which I know is difficult for a lot of people – you’ll find that South Dakota’s most pressing needs were met against the Sooners.

First and foremost, the Coyotes got out of Norman healthy. Standout wide receiver Kody Case did hobble off the field in the third quarter with an ankle injury but said afterward that he was fine. Head coach Bob Nielson confirmed that Monday and even went on to say that every player that made the trip to Oklahoma would be available this week against Houston Baptist. That is fantastic news.

The Coyotes also feel like they improved in a couple of areas they struggled with during the season-opening loss to Montana. Nielson saw some good things from the offense against the Sooners, particularly in the second half. He also thought quarterback Austin Simmons played some of his best football to date in leading USD to back-to-back touchdown drives in the third quarter.

“[Simmons] completed a lot of passes in the second half. That’s certainly a performance that we can build on with him as we move ahead in our schedule,” Nielson said.

That leads us into the one remaining question pertaining to the opportunity at Oklahoma. How much will South Dakota’s most recent FBS experience influence the shape of its 2019 season?

We’ll all have to stay tuned for the answer.